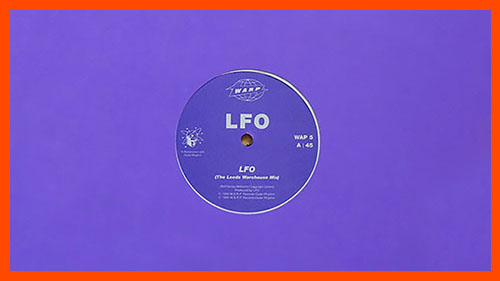 I was thinking today about how much of an incendiary bomb LFO by LFO was.

The single was Warp Records' first big hit, peaking at number 12 in the UK charts in August 1990, wedged between Timmy Mallett and Craig McLachlan from Neighbours.

"We'd just been messing around with drum machines since we were, like, thirteen, tapping away at them like they were arcade games," said LFO's Mark Bell.

And that's what it sounds like. Computer-y. Geometric. Made of pixels. It was kind of house music, which had been around for a while, but lacked any sass. No diva was going to start wailing over this kind of club sound.

This was a track from a Leeds band, released on a Sheffield label. Is this relevant? I think it is. I'm tired of lazy generalisations about "the north" but there's no way this would have sounded as good if it was made in London. It needed a Yorkshire dourness: a sense of the industrial. After the burst of yellow smiley colour that was the rave explosion, LFO seemed to be built from actual scaffolding. Structural and metallic; absolutely clanging.

Also they said "LFO" in the track. They were called LFO, they named their single LFO, the lyrics were "LFO". What a statement of intent. Tricky Disco's Tricky Disco, which was a hit at the same time, pulled the same stunt, a chirpy and childish "tricky disco!" spicing up the bleeps. That's like Orbital chanting "Orbital!" right in the middle of Chime, which they'd need to rename Orbital.

LFO spent one week at the giddy heights of number 12 in the charts: it would go on to sell 130,000 records, solidifying Warp's future and beginning a whole new chapter in electronic music history. Mark Bell would go on to produce Björk, helping move her from a spiky popster into a baroque techno experimentalist on Homogenic.

What replaced LFO at number 12 the following week? Together's Hardcore Uproar, the legacy of which should probably be saved for another blog post.

As the Pharisees attacked Jesus, and so it was that pop music fought back against LFO. In the second half of the 1990s, a band called the Lyte Funky Ones appeared. They shortened their name to LFO, thereby confusing everyone forever. I hated them. These New England popsters were NKOTB wannabes who were about as techno as a Barbie doll head on a spike.

Actually that's quite techno. I may need to think that analogy.

Within a month of (the proper) LFO's commercial success, Timmy Mallett would top the charts, followed by the Steve Miller Band's The Joker which I think is one of the worst songs ever written. Vanilla Ice would try the eponymous lyric thing by saying "Ice, Ice baby" but it would sound all wrong.

Email ThisBlogThis!Share to TwitterShare to FacebookShare to Pinterest
Read more on: bjork, lfo, lyte funky ones, together, tricky disco