How do you solve a problem like Madchester (and Fac251)? 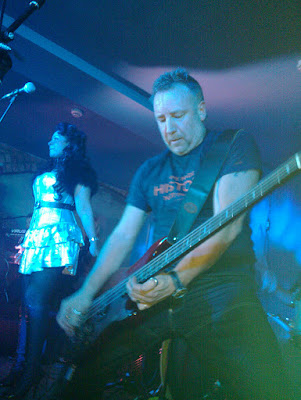 I am Mancunian from toe to quiff. I am chuffed with my city's history, from the bravery of the suffragettes and the labour movement, to the creation of the computer, to the literal rise of the Beetham tower.

But then, there are the pills, the thrills and, most of all, the bellyaches from a severe case of Madchester indigestion.

I am not about to rail against the Madchester legacy. I will never forget the sense of pride I felt simply being in the city centre at the turn of the 90s knowing that this great city was ruling the cultural world.

For someone who spent most of the day with his breakfast dribbled down his T-shirt and his evenings trying to smoke banana skins, I didn't have much to be proud about. So I bought it: I wore the T-shirts; I bought the records; I watched the Hacienda bouncers beating people up. Sweet memories.

That nostalgia still feeds this blog to some extent, and I can find myself wallowing in musics past. And so you'd think I would have been at the launch of Madchester-themed club FAC25: Factory Manchester last night, right?

Not right. Quite the opposite of right, in fact.

This whole Madchester revival really gets on my man boobs. Peters Hook and Saville seem determined to keep Manchester in some kind of memory-fogged haze, rewriting the Stone Roses era into a story that needs to be told again and again. This story they're weaving is dragging us into the past: we're caught in the loom and we can't tug free. The Manchester Passion didn't help, and neither did 1960s tribute band Oasis.

Legendary album cover designer Peter Saville is some kind of adviser to the city council on a billion squillion plopillion pounds a year. As for Hooky, the picture above* from last night's launch does not fill me with pride. It's classic Hook with his low-slung bass guitar, but it seems strangely dated like a scouser with a bowl haircut. Or anything new by Coldplay.

But this is not a rant against Peter Hook and his mates, either. Can you blame them? What else are they going to do? This isn't some weird utopia when we can leave old rock stars to die in the woods out of the sight of the youngsters.  Let them play: they made it. The Fuc51 blog is amusing, but we should celebrate Madchester in the right place at the right time.

You've googled FAC251 because you ripped off your right arm to attend the launch night and you landed on this blog looking for reviews, reactions, piccies and videos.

The problem is you. You buy into Madchester as an icon of history. You trade off the city's heritage like it's some kind of museum. Yeah, it's cool, you got "mad for it" and now you can wear hoodies without looking like a tosspot and say "Y'alright, our kid?" in your Hastings accent.

You're probably not old enough to remember the halcyon days of crap Northside singles and cheaply-produced cow t-shirts. You do know the Hacienda became seriously crap, right?

If you recognise yourself in my description, you must leave the city now. I will come for you. I will beat you to a pulp with my smiley face cannabis tin. I am Mancunian, which automatically makes me think you can come and have a go if you consider yourself to possess an adequate level of hardness.

You are the problem. You must leave the city immediately and stop attending Madchester club nights.

Madchester. Right place, right time. Let's build a massive statue of Shaun Ryder's head. We'll bow down before it once a year, smearing it in liquid ecstacy, paint and exploded pigeons***. But otherwise, we will get our fix from the Warehouse Project / Sankey's Soap / Islington Mill / Sacred Trinity / whatever floats your musical boat.

That rose tint clashes with your Afflecks hoody anyway.

** this will not apply to most readers of this blog, so it is a tad unfair. You're lovely, thank you for reading, etc etc.

Yeah, nostalgia can be a bitch, huh? It reminds me of my hometown of Pittsburgh, stuck in some perpetual fog of past, sports-related glories. There are great new things happening, but not many people are paying attention. Sad. Anyhow, your Coldplay comment was on the mark and gave me a good laugh!

Yeah, when I think of Pittsburgh (what very limited knowledge I have), I think of sports. Funny, that.

You should try living in Manchester and not being able to name a single Manchester United player. It doesn't make me very popular!

Coldplay is a whole post in itself. I probably won't bother though, because Coldplay-bashing is a bit dated now. These days, it's all about slagging off Florence And The Machine.

オテモヤン said...
This comment has been removed by a blog administrator.
3:50 AM

Coldplay bashing sounds like something you need to hide from your mother when you were a teenager.

Perhaps we can use Coldplay to bash Florence & the Machine...

Oh my giddy aunt. Now I have an image of Chris Martin and "Madam Palm and her five daughters" (as the League Of Gentlemen described it). I wonder if that's why he always taped up his fingers?

Hmm. Been to Fac251 and it was shit. Band were great (and I'd done a 300 mile round-trip to see them), but the venue was awful. Shit beer and crap sound, and the worst bit was when they started letting clubbers in while the band were still on stage, so the place filled up with shaven-headed thugs who were waiting for the gangsta rap to start and didn't give a fuck about the band by the end of the gig.

Review of the gig here.

You know what you need? To become a massive raver.

I think there are plenty of people that go to FAC251 gigs who would be up for a bit of a boogie afterwards, but when you get a band where that doesn't tend to be the case, the venue ought to change their policy.