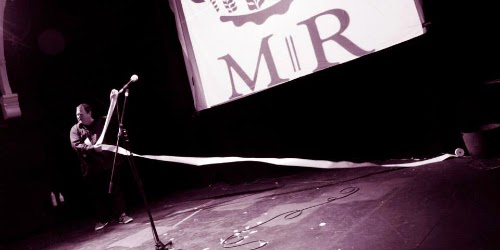 Here is an update on my performance shenanigans.

On Hallowe’en night, I co-compered fiction readings at the Royal Exchange with my Bad Language hat on. It's not a real hat. Let's not get hung up on the hat. All the readers were great, but it was extra brills to have a Booker shortlistee read for Bad Language for the first time.

The place was drizzled in orange and green lighting, giving a suitably pumpkinesque sheen for the 160 or so that attended. It felt quite austere, as though we were inside an old novel or something.

I compered again at the King’s Arms in Salford for a Mother’s Ruin cabaret night. This was a chance to stretch my stand-up muscles, throwing in short routines, one-liners and, as usual, a truck-load of props. The night is described with aplomb here.

Incidentally, my previous appearance for Mother's Ruin got a lovely review on Manchester's Finest:


"It was then time for Fat Roland, a comedian who again reduced the audience to hysteria from the start and all done without uttering a single word. Silently he took the audience on a tour about Manchester from doodles he’d drawn himself."

Some of those drawings got a second outing at the Spoken Word Showcase in Salford. In some ways, this was the most interesting experience. I teased the audience with an idiot persona, with readings and doodles that were deliberately childlike. Once the audience was hooked – and who doesn’t love a low-status idiot – I allowed what I presented to become more skilful, ending on a dark and distinctly adult note that was entirely without punchline. Proper enjoyable.

I have three events this week, so you should choose one at which you can show off your best hat. On Tuesday, I will read a fiction piece at a Bad Language / Blackwell’s collaboration with Tony O'Neill and Bluemoose Books. On Wednesday, it’s Bad Language at the Castle with Ralph Dartford from A Firm Of Poets. And on Thursday, it’s back to Blackwell’s where I will compere an evening of intelligent talks based around the Very Short Introductions books, run in conjunction with Oxford University Press.