Exploding wheelchairs: how to explain Squarepusher to normal people 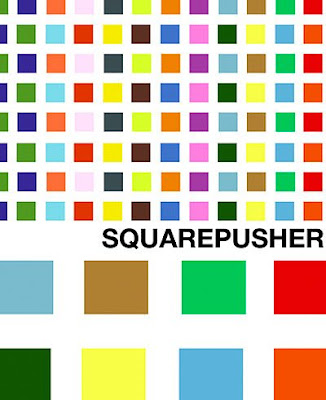 I'm fed up having to explain Squarepusher to drones who are too busy bopping to Pink to succumb to the clanky magic of drill n' bass.

And so it goes:

My boss: I need to get into your log-in. What's your password?

My boss: Square pusher? That sounds like some sad kind of dance.

For my own future reference as much as anything, and in celebration of his new album Just A Souvenier (in shops next week but already in at Bleep), here are a list of ways I shall refer to Squarepusher from now on:

1. A nail-bomb thrown into a skip, which in turn is being humped by R2D2.

2. An iron bin full of iron filings being rolled down a hill made of iron.

5. A jazz bassist being attacked by a wasp.

6. A wasp being attacked by a jazz bassist.

7. Spiders scurrying over your face while you're dreaming about fluffy penguins.

8. An army of hammers. Laughing.

I should point out, for career reasons, that my boss is a very nice man and has never bopped to Pink in his life. He does, however, have cacking awful music taste.

Oh and the cheery Squarepusher design above is a great poster from Standard Motion.

Don't waste your time trying to get Pink fans into Squarepusher, or any form of decent music. It's a waste of breath/energy/finger skin expended on typing.

I on the other hand, have been curious about Squarepusher for some time but not known where to start. Suggestions please!...

Simon: start with his 2006 Hello Everything, which was probably the most accessible album he'd done for a while. I rate 1998's Music Is Rotted One Note as a good introduction as well. For singles, listen to Red Hot Car, Vic Acid and Welcome To Europe. Oh and everyone else reading this... listen to Simon's radio show!

Nat: Fatotograph was all about me blogging from my mobile. My creativity liked it - my bank balance didn't! (Thanks for that, T-Mobile.)

9/10ths: Yes, the design is an expression of 20th century neo-Edwardian revivalism mixed with south Berlin fashionistic minimalistica, with more than a liberal sprinkling of me clicking on a random blogger template.

There's nothing wrong with liking Pink. It may not be your sort of thing but I don't care. It's not bad music, it's just not to your taste.

And that goes for you too Simon. I would have words with you about it on Tuesday but I'll have forgotten by then.

Pink can be quite good, very good in fact, despite her annoying tendency to release below-par singles.

I love Pink because of her political sensibilities - it's 'fuck you' music - I like to listen to it while driving - shortly after passing my riving test (3 days...) I drove to Sheffield on my own, listening to Pink and telling all the idiot drivers who wanted me to go faster (not that I was going slowly - I just understand the concept of a speed limit...) to fuck off. In my head.

Squarepusher may be better. I'd even be prepared to listen to it. I don't mind you criticising Pink but I do object to being written off as not worth bothering with because of what I like. I think it's rude and narrow minded.

Having listened to Just A Souvenir I think you need to add: 11. Not at all like Squarepusher

It's like some crazy jazz vibe. I think I can hear some Music Is Rotted One Note in there.

There's definitely echoes of Rotted One Note and the classical guitar from Ultravisitor, but where on earth did A Real Woman, Planet Gear or Delta-V come from? They made me smile though just for being different :)