Not much coming up (lie) 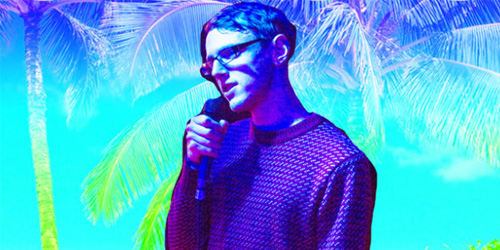 I've been flat out running events. I hosted a bunch of stuff for Manchester Science Festival, and for Bad Language. Oh and I did a really fun support slot for Zach Roddis (pictured) which was the closest I've got to an Edinburgh-type performance since the Fringe. Eight events in nine days. It does mean I've been off the radar a little this month.

I've not much coming up. November and December will feel like time off, despite at least four Bad Language events. Also, later this month, I compere a new spoken word night in Didsbury called The Word. I'm really looking forward to this: it'll be in an old stomping ground with a fairly new crowd for me. Then in December, I return to the Contact Theatre to perform with Mothers Ruin, alongside local poetry legend Gerry Potter, spectactular drag hero Cheddar Gorgeous and whole bunch of other talented alternative artists. This will sell out, so grab a ticket now. It'll be fun to play with queer identity in my usual idiotic style.

Someone asked me today if all this performance stuff is leading me in a direction I want. I dunno. I'm lucky enough to have spare time to trounce round Manchester stages building and knocking down weird word sandcastles. Other people my age have families and commitments and boring things like organised sock drawers: I get to splurge my idiocy over audiences in the name of art. I'm having immense fun.

Perhaps there are two things I'm neglecting. Partly my health: I definitely could do with shedding a pound or twenty. And mainly, my fiction writing: I have a file full of stories to polish, and new ones to write. Proper page stuff, not throwaway idiot open mic stuff.