Hey Fat Roland! 40 Minutes Of Idiot at the Edinburgh Fringe 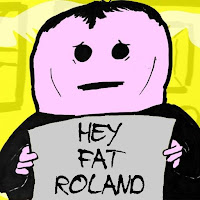 I'm off to the Edinburgh Fringe to do a show. Here's the blurb:

Written before the won the Saboteurs again in 2016, of course. Free entry, no booking necessary. Just turn up. But blink and you'll miss me: here's the listing in the Edinburgh Fringe programme, and here's the show on the Free Festival site. It's at the Newsroom and because it's only 40 minutes, it's gonna be performed to an inch of its life. See you there.

(I'm also live podcasting every month at Gullivers. The next one is this afternoon. Come along for an hour or two of utter experimenting.)