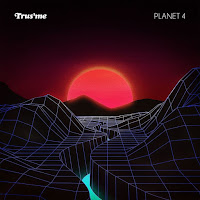 I'm pretty sure I read an article recently about how Manchester had lost its musical identity, blah blah blah. I dunno, I could google for it, but I suspect the only result will be an ageing has-been Manc with dishcloths for ears.

Manchester's Trus'me has swapped his soulier Fat City sounds for something darker on new album Planet 4, even more so than his last album Treat Me Right. As a result, he's winning this technohead over.

It's only a two minute excerpt, but listen to the analogue sass on the Soundcloud clippy thing of Here & Now below. It's nice.

Also can we have a polite smattering of applause for the album cover? It's like Tron's gone on holiday and taken a wrong turn past Jupiter.