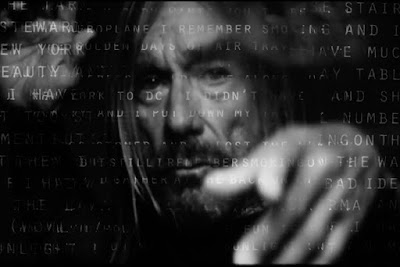 Iggy Pop and Underworld tried to drum up a track for the Trainspotting sequel T2, but they failed because they were all honked up on skag.

Actually, they weren't, but their new collaboration Teatime Dub Encounters did arise from Trainspotting-inspired studio sessions in a London hotel room.

"Hello, is that room service? Yeah, have you got a spare jack to XLR lead, we've run out. Oh and Ableton Push. Just leave it outside the door."

The result is an EP that doesn't much feel like a continuation of Underworld's previous album Barbara Barbara, We Face a Shining Future.

Instead it feels more the kind of ephemeral collaboration you got in the mid 90s, when Begbie first chucked his pint glass off a balcony. When Iggy Pop or Lou Reed or even flipping Pavarotti turned up in other people's stuff.

In other words, odd, awkward, not cool, but kinda charming.

My favourite on the EP is Trapped. It feels like Johnny Cash trying his hand at disco, if it was mixed by Fluke. Jump over to YouTube for a listen.

I can only hope there'll be more bleepy stars giving ageing singers a chance. Skrillex and Dolly Parton. Orbital and Vera Lynn. Autechre and the Keyboard Cat meme  I know that last one doesn't fit the joke - I just really want to see Autechre perform with Keyboard Cat