There is one John Cage joke and it is this: 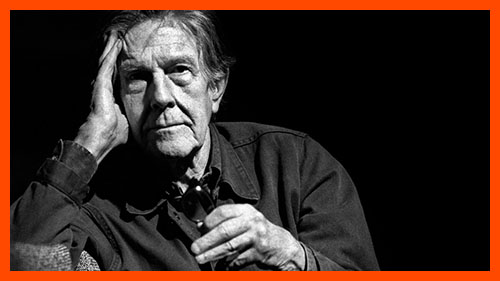 There is one John Cage joke.

The avant-garde US composer had a long and fascinating career, but he's best known for his 1952 composition 4′33″.

The whole thing with 4′33″ is that's it's silent. Four and a half minutes of nothing. That's the schtick he's known for, whether he liked it or not. Kenny G's got his saxophone, Cher's got her autotune, Eric Morecambe's got his glasses, and Cage had this weirdly silent record.

Of course, it's not silent. The record is actually a bunch of musicians sitting down in a room for a bit, not making any deliberate noise. What you're hearing is the sound of a room in which nothing much happens.

But it's easier – and funnier – to think of 4′33″ as a silent record. Because then you get jokes like this in Viz: 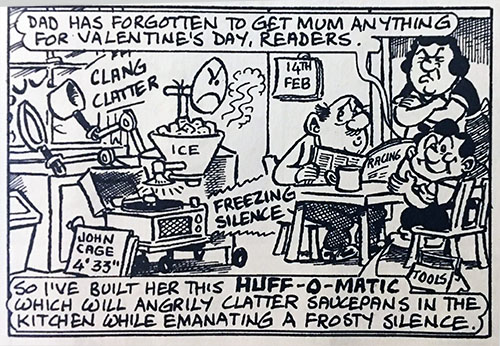 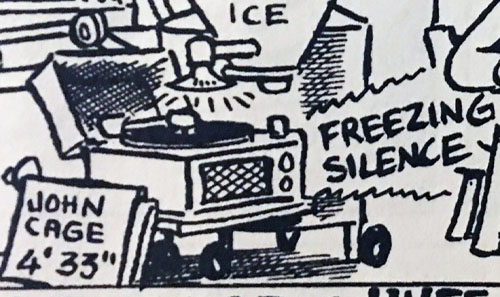 Hat tip to whoever I saw post about this online: the origin is lost in the depths of an infinitely scrolling timeline.

There are plenty of other similar cartoon jokes on the internet about this quietest of records. A pianist messing up the song by accidentally playing a single note. John Cage carol singers standing shtum in the snow. And this XKCD cartoon.

I'm not immune either. My show Seven Inch (March 17th tickets available here) has a silent John Cage joke. Of course it does. I leave no hack comedy stone unturned.

There's a bit in the show where I talk about lyrics. This gives me a repetition joke as I recite the ad infinitum inanity of the Black Eyed Peas' I Gotta Feeling (although I'm swapping this out for a different song at the March 17th show).

It also gives me a chance to recite the lyrics for John Cage's 4′33″. The joke is, of course, there are no lyrics: there's a whole load of nothing. Ha ha ha ha. So funny. Look at him standing in silence, confused. Sigh. It comes across as a special joke for music nerds, even though 4′33″ is stratospherically famous for a piece of experimental classical music.

This is the point in the blog post where I hilariously include a quote from John Cage about his famous work, but actually it's just a few blank lines. Ha ha bonk: you just laughed your head off.

Maybe I should do something in the show about the loudest song ever. Ten minutes of me yelling into a microphone, and then I explain that it was a tribute to AC/DC or The Who or one of those screamo metal bands that sounds like a malfunctioning washing machine.

Please don't leave a reply in the comments. It's what John Cage would have wanted.

Further Fats: Reviving my shrivelling grandma and getting out of my depth with Mahler (2007)

Email ThisBlogThis!Share to TwitterShare to FacebookShare to Pinterest
Read more on: acdc, john cage, the who