Warning! Dinosaurs are taking over the UK album chart! 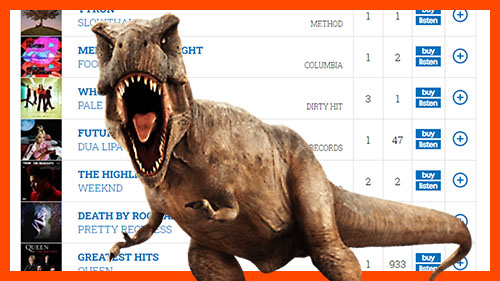 You know that movie where Richard Attenborough breeds a load of dinosaurs and then they stomp all over a theme park while Jeff Goldblum from The Fly doesn't turn into a fly and Richard's all like 'screw this, I'm off to play Santa Claus in Miracle on 34th Street instead'?

Well, that exactly what's happening to the album charts.

The dinosaurs are taking over. Instead of the album charts being full of cool young bands like The Kneepads, Post Office Flip Flop Explosion or Digital Colostomy, it's packed with bands that have been around the block so many times, they've worn a groove in the pavement.

By the way, those cool young bands don't exist. I made them up.

Mint Royale pointed out that this week's album chart is full of incredibly old LPs because music fans are streaming the same favourites over and over again. "An Oasis compilation is getting enough steady streaming to probably just sit in the top 30 for ever," he says.

He's not wrong. The current number one album is brand new: Tyron by that cheeky scamp Slowthai has been around for precisely one week. But that's not typical. 60% of this week's top 100 has spent more than a year in the charts, which is a big rise on five years ago when it was just 35%.

Let's take a look at the longest-toothed dinosaurs in the current album chart. Here are the LPs sitting in the charts right now that have clocked up the most chart weeks since their release.

Just outside that tyrannosaur top ten? Time Flies 1994-2009, that aforementioned Oasis compilation which has spent 389 weeks in the album chart, 216 of those weeks consecutive.

This is theoretically fine. People are caning their favourite music, maybe having living room discos on Saturday nights while their pet dog looks on in confusion, and there's nothing wrong with that. You spin that old ABBA record, daddio.

However, these craggy dinosaurs will sell bucketloads of albums come rain, wind or scattered sunny spells. And they're clogging up the charts, reducing the number of chart opportunities for newer acts further down the pecking order: active bands who are writing and releasing fresh tunes in a Herculean effort to gain chart recognition.

Just a couple of blog posts ago I raved about the appearance of bleep techno in the hit parade and how it blew my tiny mind. I'm fascinated by new shiny things, like a magpie or a baby or a magpie looking at a baby. I don't want to delve into the latest album chart and see the same ancient faces with their expensive microphones and branded plectrums and anecdotes about how they met George Harrison once in a Tandy electronics shop. Serious yawn.

Mint Royale goes on to suggest that perhaps the album chart should be subject to ACR. This stands for Accelerated Chart Ratio: in the singles chart, this is used to weaken the chart position of songs if they've been around a while. It's a modern oddity that became necessary after Ed Sheeran almost monopolised the charts in 2017 in a move that even the Roman empire would have called "brazen".

I hope they sort it out soon. Otherwise the dinosaurs will continue to rampage unimpeded, and before we know it we've got a Lost World situation on our hands. And nobody wants Lost World.

More Fat Roland: No new electronica in the singles chart, repeat to fade (2009)