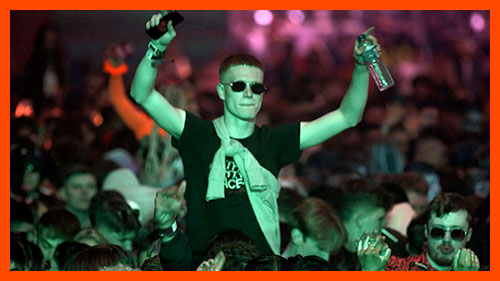 The sight of thousands of revellers crammed into a Liverpool club the other night was initially quite disconcerting.

Where were their masks? Why weren't they distancing? Where were all the awkward elbow bumps?

Circus's The First Dance was actually one of two nightclub experiments at the weekend to see if large-scale music events could work with the right safety measures in place. The clubbers went through a scientific testing and monitoring, turning them into guinea pigs with glow sticks. Which obviously is the cutest thing in the world.

These are the first official club events in the UK since the virus hit, and it was a delight to see. Big up to Liverpool for pioneering our way out of lockdown: until now, the city was only famous for Richard and Judy, The Zutons, and Ken Dodd.

The line-up included the Blessed Madonna, Fatboy Slim and Sven Väth. The last name impressed me: he's one of my all-time bestest faves: here's me raving about him in 2010. Sven Väth helping end the apocalypse. Brilliant! I knew I could count on Sven...

I mentioned Väth on Twitter, and I was immediately put right by Posthuman, who in non-virus times runs a night called I Love Acid and is an all-round good egg. Turns out Sven is a plague rave DJ. Posthuman was hugely positive about the event, but likened Väth's booking to a "having an arsonist on the fire safety board".

What's a plague rave? These are big club events held in places in the grip of Covid-19, with headline acts flown in while the virus spikes with deadly effect. In fact, the events are probably possible precisely because the host country has lax virus regulations. Clubbers arrive in their thousands and the virus claims its victims, putting pressure on already inadequate levels of testing and health care.

Sven Väth has been touring India, a nation suffering a brutal Covid surge. Väth has always had an attachment to the iconic clubbing destination of Goa, so it was no surprise that particular Western Indian state was on his gig schedule. His appearance behind the decks at a particular Goa event in early March was described by one giddy electronic music website as going "viral among fans of electronic music." No irony whatsoever. I won't link to it here.

Let's draw out a timeline. In the month after that March Goa gig, Covid cases across India rose by a multiple of six. Now let's extend that timeline. On the day of writing this piece, around two months after that Goa gig, the number of cases across India was 26 times larger. And in Goa specifically, cases were 64 times higher than they were in early March, albeit rising from a comparatively lower base.

Excuse the number crunching, but this helps us understand that any big-name DJ show taking place in India in early March could easily have had the consequence of being a super-spreader event.

This isn't just about Sven Väth, of course. Business Teshno has been raising awareness of such Covid-calamitous behaviour for months, calling out the likes of DJs Dixon, Luciano, Solomun and Nina Kraviz.

There are plenty of acts criticising plague ravers too. Carl Cox said in Mixmag:

"It’s irresponsible to be out there at the moment... Having a party in a pandemic, it doesn't make any sense whatsoever. People are still suffering from this and we aren't out of yet. This isn't a Steven Spielberg movie called Panic, you know: we are in it."

"They don’t need to do this. Take a year off, write an album. So many people lower down in dance music are struggling and this paints the whole industry in a bad light."

I feel weird linking to Mixmag considering they've been raving about Väth's Liverpool appearance on social media, but anyhoo...

This brings us back to the Liverpool experiment. This project was a shining example of science-led creativity, and everyone involved deserves a jolly good pat on the back. The line-up had its problems, but the larger picture could mean a route out of the apocalypse, and the revival of a zillion careers across the entertainment industry.

It's a shame about Sven. I'd been slow to pick up specifics on the whole plague rave thing, hence me initially praising Väth's involvement. I'd seen Business Teshno's social media activity, but it all seemed rather confusing. Mainstream outlets like Resident Advisor and Mixmag don't seem particularly vexed with the plague rave thing, and there appears to be a widespread suspicion that once the clubbing industry gets back on its knees, the offending DJs will continue to coin it in, with no consequences of their pandemic actions.

As for me? I'd love to go clubbing again – I Love Acid have committed to not booking plague rave DJs, and it will be one of the first nights I go to. That said, as someone who's higher risk, it'll be some time before I have the confidence to get all sweaty and giddy with strangers. We'll see.

Further Fats: A ticket to ride: bumbling into MC Tunes and putting the green suit away (2007)