Cover me bad: Chime by Orbital 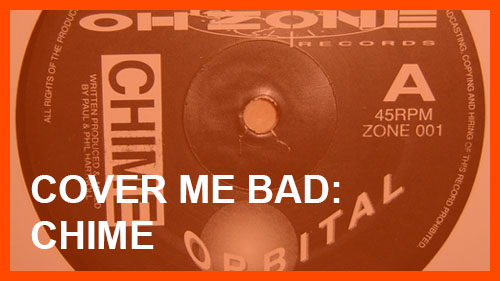 I have to make a huge apology. For the last couple of days on this blog, I have pretended to launch a covers band. I then spooled off a load of nonsense about whisks, washing machines and constipated cows. I am sorry to everyone I disappointed.

Please do not read the last two blog posts. They were a waste of valuable internet resources.

Let's take this seriously. I'm going to write a proper cover version, with proper instruments, and people are going to respect me as a musician. Let's choose a random song from my record collection.

Kettle bells, which I don't think are real bells, but are the kind of things weightlifters lift up to show people they can lift things off the ground. I want those kind of bells.

Bell's whisky. I need to drink as much Bell's whisky as possible even though I read a booklet once that said blends aren't as good as single malts and I never learnt why but I remembered it so I could sound intelligent when I talked about whisky.

The TV programme Saved By The Bell. Alexander Graham Bell who invented the telephone even though it was probably one of those urban myths where he got the credit but the telephone was actually invented by Ainsley Harriott or something.

I think that's going to sound lovely. Friedrich Nietzsche once said that “without music, life would be a mistake.” My beautiful cover version of Chime by Orbital, with its infinite cacophony of bells, finally gives Nietzsche's statement true meaning.

Chime has got bells in, right? I can't remember.

Told you I was going to take this seriously.

Email ThisBlogThis!Share to TwitterShare to FacebookShare to Pinterest
Read more on: cover me bad, orbital