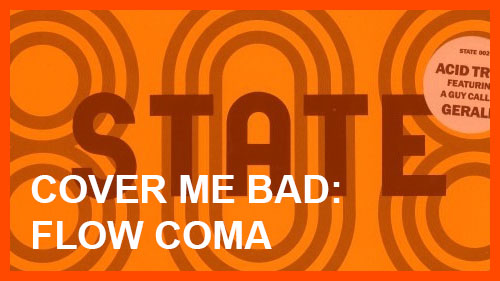 This is the blog police. It has come to our attention that there has been suspicious activity on this Blogger account for the past five days, masquerading as a blog series called Cover Me Bad.

The conceit of the series is that the writer and performer Fat Roland thinks he's brilliant at creating cover versions of electronic music tracks. The 'joke', and we use that word loosely, is that he's really bad at it, and each blog post ends in a stream of idiocy.

According to the Weblogs Policing Act 2005, this is really bad blogging. Let's use an example.

He would always print something like that. It is alleged this is a random song choice, picked from his record collection. We have evidence to believe the decision is actually more half-hearted, plucked carelessly from thin air. He clearly is not researching his blog posts.

He would then take elements of the track, in 808 State's the case the dirty acid and the skippy snares, and then imagine how he would mimic the sounds. However, instead of a serious tutorial on Ableton or similar music-making equipment, he usually resorts to bad puns or forced literalism.

For example, taking the dirty acid and the skippy snares, he would have then talked about getting some actual acid and putting dirt on it, or placing a snare drum in a skip.

This is, at best, lazy writing and, at worst, a crime against blogging. The evidence is written in black and white.

In a recent post, Mr Roland pretended to have a conversation with his own blog, thereby breaking the structure of the Cover Me Bad blog series. This was a particularly heinous crime and we hope he doesn't do this again.

The reader is advised not to have any contact with Fat Roland's blog, otherwise the reader will be charged with accessory to poor interneting.

Email ThisBlogThis!Share to TwitterShare to FacebookShare to Pinterest
Read more on: 808 state, cover me bad