Cover me bad: Are We Here? by Orbital 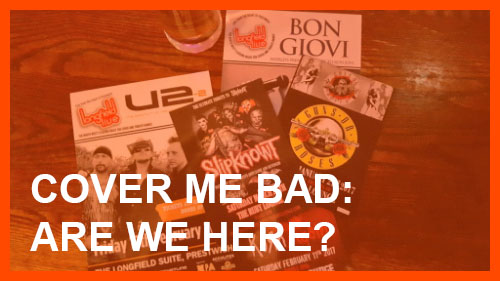 Ages ago, I found a bunch of tribute band flyers in a pub. Among them were Korn Again. Guns Or Roses. U2-2. Bon Giovi and Slipnowt. The latter being from Yorkshire, I presume.

Tribute bands are the extremists of the cover band world. Committed to one particular act, one particular musical backlist. You can't stray if you're a tribute band. Perhaps a Busted tribute band called Busted Flush could get away with a McFly track or two, but you have to stay within your own chosen discography.

Not so for other cover bands. You know the kind. They play every Tuesday night in the back room of the Duck & Testicles, with the same old playlist. Achy Breaky Heart, Simply The Best, Knocking On Heaven's Door. They'll play anything that gets someone's foot tapping over a warm pint of John Smith's. Instead of going balls deep into a single act's oeuvre, their repertoire is wide and shallow, like a puddle or similar spillage.

You know what? I can do this. Let's dive into my pile of gramophone records and choose a song at random. I bet you ten billion pounds I could do an ace cover version of any song. Okay. I'm flipping through now. Eyes closed. Here we go!

Oh. Right. I was hoping for My Way or something. We can work with this, don't worry.

The first main element are the questioning vocals. Some bloke waffles on asking questions, as if they're bugging a woman on Twitter. Are we here? Are we unique? What does God say? I'd recreate this by kidnapping a vicar and make them read a sermon under duress.

Then there's the drum and bass-y stuff. Easy. Set up an obstacle course of kitchen implements on the hill near my house. Whisks, toasters, knives, that kind of thing. Anything metallic that will make a clattery noise when hit. Put the vicar on roller skates, and as soon as they starts their sermon, give 'em a good push down the hill.

And finally, the other thing about Are We Here? is that it's long. So once the vicar has rolled to a stop, their battered body embedded with various kitchen gadgets, yank them back uphill with a rope and start all over again. It'll be like Sisyphus with his boulder but, y'know, not that at all.

Like I said, I can do an ace cover version of any song, and I've just totally proved it. You now owe me ten billion pounds.

Email ThisBlogThis!Share to TwitterShare to FacebookShare to Pinterest
Read more on: cover me bad, orbital