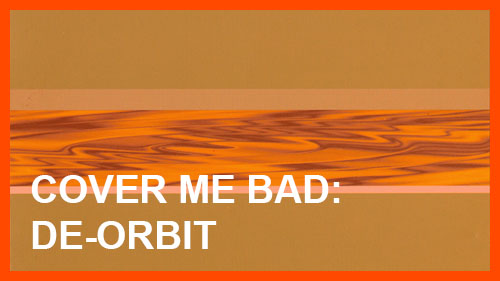 Look, can everyone just get off my back?

I've accidentally ruined by blog. For the past three days, I've got caught in a daily loop of (a) pretending that I'm making cover versions of other songs and (b) then posting one of my favourite electronic music tracks and being silly about it.

If I post one more stupid blog post about covering a song then not actually taking it seriously, this blog is finished. You're all hating it: you've made that much clear. Just leave me alone. This has to end.

This is perhaps the only track I love that has, at its centre, a Kool & the Gang sample. It's the breakbeat that persists throughout the track. Sigh. Are we really doing this? Alright then...

To do a cover version of De-Orbit, I'd kidnap Kool & the Gang and make them perform for me under duress. If they don't cooperate, then I'd threaten to withhold their comfort blankets / Gameboys / Pot Noodles / crochet sets / whatever gets them through the day.

Look, I said I would stop doing this. It's demeaning. No-one wants to read this.

There are warm pads adding rich melody in the background that sound like a whale quietly appreciating Water Lilies by the impressionist artist Monet. So I'd use a whale. And I'd get that painting from wherever they keep Monet paintings.

This blog used to matter. It won two awards eleven years ago. That MEANS something, y'know.

As the track fades out, there's some DJ-scratch style detuning going on. The effect is something akin to a malfunctioning laser in a science fiction film. So, er, I'd get Fatboy Slim and detune him. And get a laser. From a film.

Look, I don't know. It's a classic track and nobody should be doing a cover version of it. This whole thing is ridiculous.

Never again. There will definitely not be another stupid 'Cover me bad' blog post tomorrow. Definitely not.

Email ThisBlogThis!Share to TwitterShare to FacebookShare to Pinterest
Read more on: cover me bad, speedy j