Backstage with the Backstreet Boys (off camera) 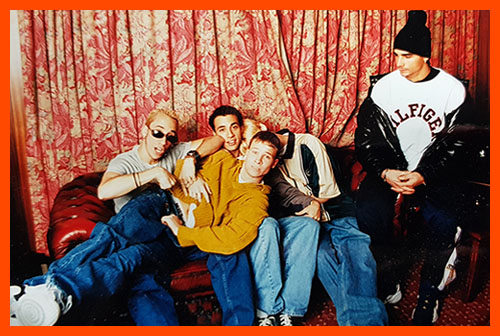 While tidying, I found an old photograph from the time I met pop royalty.

I wish I could say it was a picture of me meeting the Backstreet Boys. Sadly, I'm in the room, but I'm behind the photographer waiting for them to finish this photoshoot.

This was backstage at the Manchester Apollo during their 'Live In Concert Tour. It was late 1996, around about the time Quit Playing Games (with My Heart) launched them to international acclaim. I was a local journalist, and I'd rung up their PR people pitching an article called 'backstage with the Backstreet Boys' in which I hung around backstage with the Backstreet Boys. The simple ideas are the best.

So here I am, off camera, hanging out backstage with the Boys. I have no idea how I ended up with a copy of the photograph. It doesn't look much like a PR shot. Nick Carter with the floppy blonde hair is hiding his face, Kevin in the East 17 hat looks extremely bored, and the one trying to show his belly button (AJ?) was only posed like that because he took a flying leap onto the sofa at the last minute.

I half wonder if I took this photograph myself, although I know there was a pro photographer in the room because a magazine called Big! showed up to take pictures of Nick Carter. He was big hit with teen fans at the time. They set up a portrait station just to the left of where this photograph was taken. I can only assume the proper professional photographer took this pic, and they sent through a copy via their PR people later.

That said, I nearly had the opportunity to take lots of photographs with lots of cameras. On arriving at the stage entrance of the Apollo, I was mobbed by teenage girls. They were amassing like Hitchcock's birds in the vague hope of spotting a Backstreeter nipping out for a fag. On wading through the teenage throng, I must have said something like "EXCUSE me, can you let me past, I need to get to the band, don't you know who I AM?!". Suddenly, I was their easiest access to their pop heroes. They were armed with those insta-cameras that you use for holiday snaps: I immediately had a dozen of them shoved in my face. "Can you take a photo of Brian? Tell them Tracey says hello!"

The atmosphere backstage was quite amiable. The cheeky sofa-diver (or is it Brian?) was hyper, and spent the time pinballing around the room like a terrier on heat. I chatted to Kevin for some time, and came away supremely impressed. Although BSB were a manufactured boy band, discovered by pop mogul and Ponzi scheme fraudster Lou Pearlman, they'd been working hard as singers, and they seemed more authentic than the infinite number of copy-paste Ken dolls that were clogging the charts at the time.

If I find the published 'backstage with the Backstreet Boys' article, I'll let you know. Fancy finding something like this from 25 years ago. I had no idea I had this photograph: until now it had only existed as a memory, mainly of the belly button bloke (Brian, I'm sure it's Brian) diving onto the sofa.

Further Fats: Mark Morrison pumps up the world and lets down my dreams (2020)

Email ThisBlogThis!Share to TwitterShare to FacebookShare to Pinterest
Read more on: backstreet boys