I am a Mancunian and yes you can taste my honey 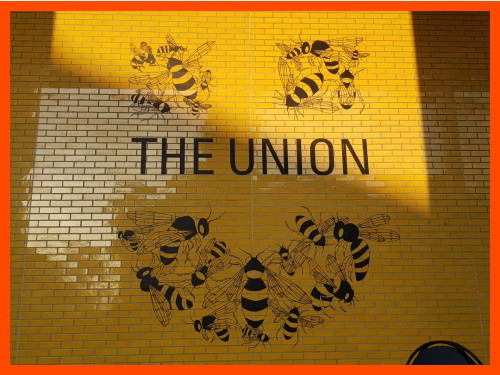 I am, it has been rumoured, a Mancunian. This means I was born in Manchester, which famously invented Vimto, the computer, and mouthy lead singers who say "sun-sheeiiine" instead of "sunshine".

What Manchester might not be as famous for is the apiarian emblem of the worker bee. The Victorians invented this when their graphic design department was trying to come up with something to represent Manchester's industrial ambitions. They made a coat of arms with bees buzzing around the globe. Cute, if impractical for international trade.

There are bees everywhere in Manchester. On the street furniture. Sprayed onto walls. Actual bees. I do like the symbol of the bee. It reminds us of the mill workers in the olden days who used to dress in stripes and suck on flowers. Even today, if you squeeze a Mancunian, a little bit of honey comes out.

Other cities' emblems are much worse. Birmingham is just a pile of spaghetti to represent its road system. No sauce, no nothing. London has a corgi driving a red bus. And Glasgow has a man screaming into a drain. Lovely, but not as good as Manchester.

This vague bee blather was inspired by this bee design on Manchester Metropolitan University's student union building. It doesn't quite work because the lines are too thin, and are lost amid the brickwork. But I like the idea of students getting bee-indoctrinated. I imagine tannoy announcements calling people "busy bees" while everyone works in hexagonal hive pods.

I'll leave you with one of my favourite bees. This is Are You Okay by Mason Bee, who is not a bee but is also very much a bee. Enjoy.

Further Fats: There goes the hear: Manchester has enough gigs (2011)