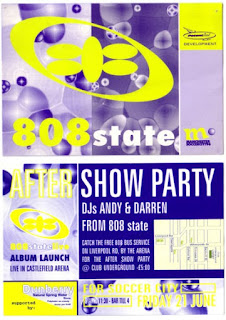 The Manchester Arena attack was a cowardly act in a brave city. A city forged from hard work and human rights and something to do with bees.

There's nothing meaningful I can say in the wake of this awful event. Except this: it's not just an assault on young pop fans - as with the Bataclan, it's an assault on all of us.

Dammit. That sounded so cheesy.

I can't help thinking of the 1996 bomb, and the defiant party that followed. Have a look at the flyer (from the Manchester District Music Archive). 808 State's Castlefield Arena gig six days after that bomb was reported by Mixmag here: "Dilated pupils abounded - the kids wanted quite simply to 'ave it!"

My pupils weren't dilated, but I "had it" so hard I woke up drunk in London with some record company person offering me cocaine. I refused. Long story. I'll tell you over a J2O sometime.

Anyhoo, back to the present day. My heart go out to those who lost loved ones this week, and the stories of help and heroics have been amazing to read. The vigil in Manchester last night was absolutely packed, and a rather beautiful moment of connection. Tony Walsh read a cracking poem and everyone just hung out together. Apart from a couple of grumpy Twitter people, I've come across nothing other than love and respect. And a whole lot of sadness, of course.

Point is, when Manchester is knocked down, it knows how to pick itself up and throw a big stonking gathering.

That seems trite: some of this will never heal. But this city is really good at community, whether that's ravers or vegans or goths or Muslims or hipsters or poets. Whatever label you want to wear, Manchester's just about the right size for you to find your niche. Everywhere I look, many of those communities are getting stronger.

Dammit. Cheesy again. I should have pushed the bee analogy. If I wedge a crappy bee pun into the title of this blog post, will that redeem these half-thought words? Hope so.

I flipping love you, Manchester.


People just hung out after the vigil, some making symbolic gestures, many just chatting. Everyone just... being. It was flipping heartening. pic.twitter.com/P7EaJQQYph
— Fat Roland (@FatRoland) May 23, 2017