Crabby birthday: The Prodigy's Fat Of The Land turns 25 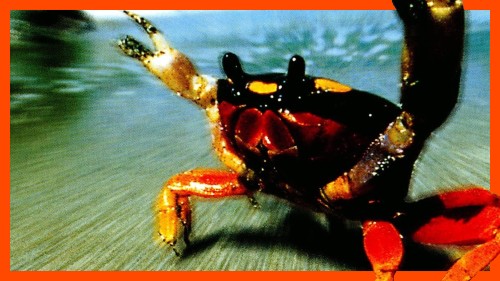 The Prodigy's Fat Of The Land was released 25 years ago today. It was the fastest selling UK album of all time, and propelled the Prodge to the top of the charts with Firestarter and Breathe.

The album cover featured a zoomed-in shot of gecarcinus lateralis, otherwise know as a Bermuda land crab. It's a species of crab that is quite happy to hang out on beaches without rock pools, as long as the sand is moist enough for its gills to operate. They tend to be vegetarian, but will chomp on animal matter if needs be. Crab facts!

I'd make a cake to celebrate this anniversary, but the Prodigy never struck me as a cake kind of band. They seemed to hang out in grotty basements while writhing in threatening ways. Feels like an unhealthy place for a cake.

Fat Of The Land was incendiary. The single Smack My Bitch Up attracted claims of misogyny. Yeah, the word bitch is ugly, but I betcha if the protagonist in the video hadn't been a woman, no-one would have batted an eyelid at the video's hellraising. They should have got me to star in it. I would have stayed in listening to Future Sound of London and playing Boggle.

The album also gave us Keith Flint, God rest his sausages. The pointy-haired bovver boy became the face of rebellion in the 1990s. Keith Flint was quite happy to hang out on beaches without rock pools, and would chomp on animal matter if needs be. Apparently, Keith used to go on motorcycle rides with the saxophonist of Madness. That's an actual fact and not some nonsense about crabs. Who knew.

Music for the Jilted Generation was a more artistically interesting album as it turned a band bordering on novelty rave into a serious act. But Fat Of The Land might the most important. Along with the Shamen, it thrust proper dance music into the uber-mainstream while, perhaps unlike the Shamen,  losing little of its musical power.

It didn't impress everyone. To finish off this short waffle, here are some reviewers who didn't get along with the fat, the land and everything between.

Anonymous review, Entertainment.ie
I didn't want to admit it. I refused to accept it. But somewhere in my brain, the honesty section probably, something was telling me that it was a piece of sh*t.

boogie woogie king, Amazon
ID RATHER HAVE CRABS THAN LISTEN TO THIS!!

ozzystylez, Rate Your Music
I listened to this in my car the other day. The bass kicks hard and my car has reasonably good speakers. But I found myself turning it down as I drove through areas with a lot of people on the road in case they laughed at me for listening to such a cheesy, dated and worn out record.

Carlos Mancilla, Amazon
The album arrived a little bent at the top corner leaving a wrinkle in the cardboard.

Peter Barczak, Amazon
Only bought cos it was a penny. Not played it yet. Three stars.

All of these reviewers need rock pools for survival, and so are limited in the range of beaches available to them. Happy birthday, Fat Of The Land.

Further Fats: A History Of The Prodigy For People That Can't Be Bothered Reading The Wikipedia Article (2009)