Brass band players, coming over here, taking over our dancefloors 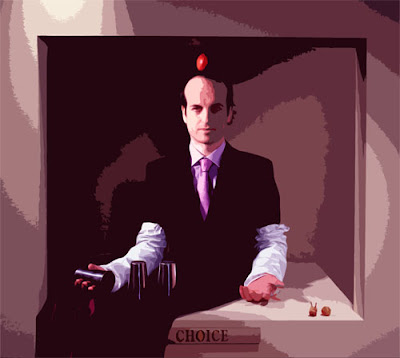 The Daily Mail is an august institution that, in 2008, has had an important and positive effect on modern culture.
I'm not talking about its constant chiding of anyone it considers as non-British, or indeed its fawning over old fashioned values where we could hang misfits and still leave the door open.

No, I'm talking about one of my favourite gigs of the year where the Matthew Herbert Big Band (Matthew pictured) sampled themselves tearing the Daily Mail into strips, before bursting the racist rags into the air in a delightful, synchronised confetti show.

Their album There's Me And There's You is a political mix of brassish oomp-ery and jittery sampling, although Eska's sassy jazz vocals are worth hearing live than through your headphones.

Also out recently was Last Step's 1961, the second album under this signature for Venetian Snares' Aaron Funk. It's a massive, brightly coloured bag of broken Roland 303s, 606s, 808s and any other shiny palindromic music box you care to mention.

If you rate Luke Vibert and Squarepusher (who dazzled at last week's Warehouse Project, but that's for another post), or if you pine for old Aphex Twin, you should have this album in your collection. Just be prepared for sporadic ruptions of cheesy pop and TV adverts.

More straight down the line is Harmonic 313's Dirtbox single, which is a darker bad-boy slice of his usual gasping slow-motion Detroit techno

When his album hits in a couple of months, it will sit proudly alongside his classic album of nearly 15 years ago, the ambient beast that is 76:14.

Ah, yes, 15 years ago. When you could leave your door open, shoot whomever walked onto your property, and Princess Diana wouldn't get suicide-bombed by social workers. Those were the days.