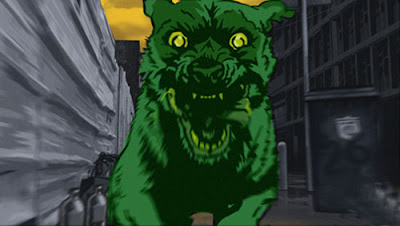 I have spent most of this week being slapped around by bacteria and being threatened by mutated microorganisms with phrases such as: "Nice bowels. Shame if somethin' were to... happen to 'em..."

Which means I'm catching up on all the wonderful blogness I would have bestowed upon you if I hadn't been as feverish as a the cast of Saturday Night Fever after they've caught scarlet fever from listening to Kylie Minogue's classic 2001 album Fever...

This is an ever-so-slightly Manchester-centric post. There was a great Rare As A Green Dog's night at the Royal Northern College Of Music last week.

The nutty but wonderful Barbara Morgenstern gaily set her grand piano on a Kaoss pad, while asbo-technoist Caro Snatch made some quite frightening noises at spoken word artist Lisa B and soprano Jenny Kosmowsky.  DJ Paizan teamed up with nimble-fingered VJ Digital Donut to provide a rhythmic contrast to the ethereal strains of Peterloo Massacre. A cracking night.

Lisa B's new collection Resonant Frequencies, set to the bold, dirty effects of Caro Snatch, will be released at Nexus Art Café in Manchester next Monday, December 8th, 8pm.  It's free to get in, but only a tad over 100 copies of the album will be available on the night.

And now for something totally un-Manchestery.  The hypnotic animation Waltz With Bashir (pictured, with my green-ness added) boasts one of those soundtracks that swoops up the film and flings it to new heights.  Let your earholes be as seduced as your eyeholes .Go see the film, before I set my infected microbes on you.