Orbital, Manchester 2009: please miss, can I go to the toilet?

The crowd at this weekend's Orbital gig were so up for it, it made the regulars at Sankey's Soap look like a bunch of depressed accountants.

It was a thrill to see the techno kings return to live performance, but I didn't expect the gig to be such an incredible, uplifting, spiritual experience. Then again, after the week I've had, I'd have danced to a farting donkey.

There were many highlights between the opening mid-tempo salvos from their introspective phase (In Sides) to the delirious crowd-pleasing Doctor? (which, to be honest, tested the Academy's sound system beyond its limit). Halcyon's heavenly vocals became a predictable 1980s cheese fest, while those keyboard lines in Chime and Impact (The Earth Is Burning) had everyone reaching for the roof.

Here are some fuzzy pictures where, if you look hard enough, you may be able to see the Orbital brothers' trademark double headlamps. No, everyone wasn't constantly asking to go to the toilet. 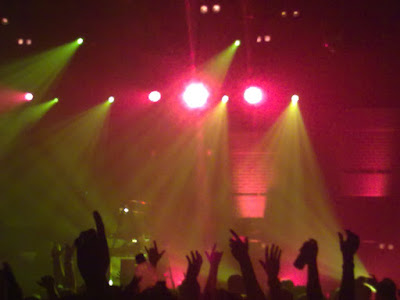 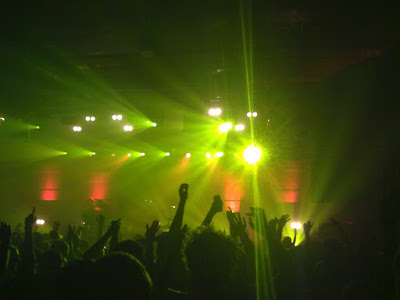 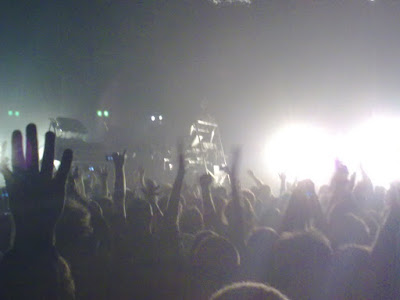 Email ThisBlogThis!Share to TwitterShare to FacebookShare to Pinterest
Read more on: gigging, orbital

Yeah, glad you got to see 'em! I was able to see them a couple of times, and their stop in DC was shortly after the whole Sep 11 mess. I remember a friend of mine who went along with me who was a bit paranoid about even going to DC at the time. Needless to say, the crowd there was also very much up for it, and i guess you could have likened it to something of a spiritual happening.

And I'm really glad it wasn't *just* a nostalgia trip at the weekend... or maybe it was, but it was still incredible.