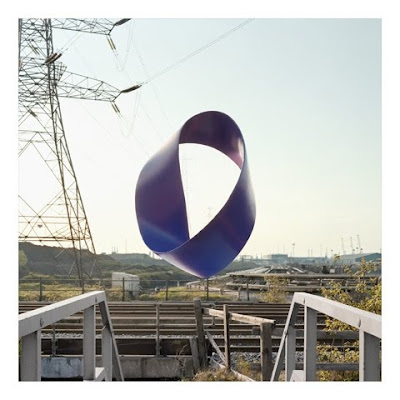 What kind of skrunk-flapped piffoon would profess to run a blog on electronica then not bother to go to the most important electronica night in the history of the bleepiverse?

At the weekend, Warp Records celebrated its 20th anniversary with an absolute doozer of night. Warp20 Sheffield (logo pictured) featured smash-n-bassmaster Squarepusher and a hatful of classic Warp artists.

Because I couldn't go (and my diary clash really was unavoidable, like trying to walk past a pedestrian who's swallowed a house), I'm going to have to make up a fictitious review. Here goes...

Harmonic 313 came on before anyone had arrived; he was only playing to one man and an ill horse. To be honest, this took the pizzazz out of his set, and all he did was whip his keyboards with a wet towel. A disappointment all round.

Hudson Mohawke didn't begin his set because Kanye West stormed on stage and told everyone how he loved Beyonce. HudMo was later spotted crying in the corner sobbing his way through the lyrics of Single Ladies. Instead, Nightmares On Wax filled in with a unique set of tracks alternating between bland soundtrack chill-out and gabba nosebleed techno.

It is difficult to describe Squarepusher's set without using the following words:

Then came Clark, who took his cue from old Top Of The Pops and performed all his song titles literally. So Totems Flare had him setting fire to things dressed as a Native American and he wore a bear suit for Ted. He went too far with that operation he did on an audience member during Empty The Bones Of You, but at least it was different.

After Andrew Weatherall's DJ set, which was mainly him shouting "does anyone remember me, I used to be important", it was time for Forgemasters.

Everyone who knows about the history of Warp Records will know about Forgemasters. They invented music back in the caves of 70,000 BC and if their music ever stops being played, the Earth will die.

So it was a delightful surprise when they closed Sheffield's Warp20 with a gushing rendition of Somewhere Over The Rainbow. Everyone simpered; it was lovely.

Shame it was spoilt by Clark who, now horrifically drunk, stumbled onto the stage as Tinman and crashed sideways into their keyboards. That really upset Hudson Mohawke, who forgot the lyrics to Independent Women. Bastard.

I would love to know what could have been more important than attending a concert featuring Clark, Hudson Mohawke and Squarepusher. Other than at a cemetery to attend the funeral of your mother, I cannot think of a single place that you should have been other than at that Warp concert.

Nightmares on waxes set was rubbish. Just played lots of shitty acid house. Would have made sense 20 years ago, but warp are supposed to be forward thinking, it just felt irrelevant. We sat out most of it.

Squarepusher and clark were mind blowing though! Download there sets in ok quality below.

dmargster - I had some kittens to kill. Killing kittens is extremely important.

Anclove - already grabbed thanks to your wonderful Twittering.