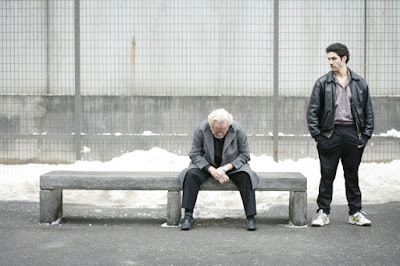 In alphabetical order and not ranking, here are the five best films of the first two months of 2010. According to me, of course. Not that I know much, but if you've seen any other films, I'll tazer you.


A Prophet
Following one character scene-by-scene in a two and half hour French prison drama ought to feel like more work than it was, but this startling mash-up of Shawshank meets the Godfather races by.

The first third is the best as we reach an Act One climax involving a brutal sex act which, believe me, is not what you've been led to expect. Tahar Rahim (pictured on the right, above) negotiates a tense tightrope of loyalty, racism and ruminant mammal dreams.


A Single Man
And you thought The Road was depressing? Of course Colin Firth deserves the Oscar. Since I saw the film, I've watched the phone call, in which he is informed of his lover's death, again and again.

His performance in A Single Man is minutely studied, as layer upon layer of this collage professor is economically stripped until one little smile near the end of the film tells you everything you need to know about his journey. Contains serious levels of man totty.


Precious
Another Oscar tip, this time for Mo Nique as the sadistic parent of put-upon Harlem teenager Precious. I didn't think a film produced by Oprah starring Mariah Carey would be this good.

This is a drama that wears its intentions a little bit too much on its sleeve (hey, we need to create character empathy, let's bully her to hell and back) but it is still a rivetting and immersing experience where the cold streets of Harlem will have you in tears.


Sherlock Holmes
Not my kind of film, so why is it here? Four words. Robert Flippin' Downey Junior. He performs the opium-toking sleuth as Johnny Depp played Captain Jack Sparrow: just the right side of unhinged throughout the whole film and a reeling contrast of colour and sparks to Jude Law's stuffy Watson.

It's a shame then that the downside is its director, who mistakes story for fight scenes. Still, what amazing fight scenes (the double-scenes are a revelation). It's Ritchie's best since Lock Stock and that includes Snatch.


Up In The Air
Clooney does his Tom Hanks, deadpanning it as a man who spends his life in airports. There are no fireworks in his performance, no hair gel obsession, no teeth paranoia, just a bloke who is slowly having his barriers kicked down by a delightful Anna Kendrick (playing out-of-her-depth to perfection).

It lacks substance, despite Clooney going through some massive rejections. Could have done without the talking heads.


Also-rans
Hey, Fats, you missed The Road. Yeah, I took a wrong turning because the McCarthy adaptation bypassed a rollercoaster of emotion in favour of something akin to a trip to the shops. You're right, though, it was otherwise brilliant.

Youth In Revolt was Michael Cera giving us more Michael Cera, but that's a good thing because he lights up the screen throughout - and there's a lot of him this time.

Meanwhile, Daniel Day-Lewis is predictably an eye-popping, heart-pumping master of the craft as a washed-out Italian film director in Nine. It's just a shame most of the songs are tedious and the story seems to miss the mark.

Email ThisBlogThis!Share to TwitterShare to FacebookShare to Pinterest
Read more on: best movies of 2010

A Prophet - can't really say because Cornerhouse's dodgy equipment robbed me of the last 45mins or so. I was enjoying it however the first act was considerably better than the second, which was starting to drag in my opinion. It segwayed from a taut emotional/psychological thriller into a more drawn out Goodfellas-style 'life as a gangster' thing which I'm beginning to think is getting a bit tired now. But I can't really say until i've seen it to the end.

Sherlock Holmes? Sherlock NOmes i think you'll find. talk about robbing one of our most precious of myths and subjecting it to Hollywood annihilation. Jeremy Brett must be spinning in his grave - Downey Jnrs portrayal misses the point of Sherlock completely but it is the script writers fault and Ritchie has to take a lot of the blame. This was Sherlock for the deerstalkers, not for the Conan Doyleists. the best thing about it was the music, the rest was all fluff and bumpf in a Dan Brownian Sherlock Holmes tick-list that just didn't do it for me, sir.

That's enough of that then. But, seen Ponyo yet? There's a worthy inclusion

I just saw Ponyo at the weekend. It' a wondeful film and every bit as engrossing as it's CGI cousins like Avatar.

I have no special love for the Holmes legend, but lots of love for Downey Jr, so I think I was a bit biased.