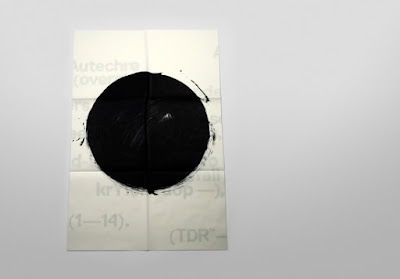 Although it wasn't due for another month, the digital version of Autechre's new album was released this week.

In an email to their mailing list yesterday evening, Warp Records' online record shop said: "As a surprise to all of the customers who pre-ordered the Autechre Oversteps CD or vinyl album, on Monday we dropped the digital versions of the album into their Bleep account a month earlier than expected."

Each of the 14 tracks comes with its own gorgeous artwork. You can buy it from the Bleep shop by clicking here. You can also stream the album in the player below. The CD will still come out in the week of March 22nd.

The album was supposedly leaked in late January when a set of tracks ran riot throughout the internet. It turned out to be an album by Altered:Carbon and was deliberately leaked by a friend of their record label.

The label Section 27 later told me: "[They] shared the file for one day and it went mental, if just a bit hilarious."

And it was hilarious, but it still left us without the new Autechre album. Then on February 8th, someone with a promo CD linked to the real thing in the comments on my blog post about the Autechre / Altered:Carbon leak.

And the rest is history. So many people ended up owning it, albeit in a lower quality rip, that it seems Warp Records have jumped early.

Happy listening. It's Autechre back to their bleepy best.

i've only listened to it about four times since last night, but oversteps strikes me as excellent and probably the most immediate thing they've done in years. very fm-ish 80s feel to a lot of the textures, with a lot of surprises considering how far down the conceptual rabbit hole they've been in the 2000s.

Dhex's description so far sounds like a good one, but I'm still hesitant to get too excited about another Ae release. Funny, 'cause about a day before Bleep announced the release of Oversteps, I had sold their last three releases to a used cd store. I still couldn't really get into them years after repeated listens. My issue with all these music heads getting so worked up over another new Booth & Brown production is that I find they never quite ever live up to the hype. Yes, you will get your fans who pretend to reside on some higher plane and posess the intelligence to decipher and appreciate Ae's latest output, but in truth it's no better than plenty of other music currently out there. Your earlier post with regards to the Altered:Carbon leak illustrates this situation perfectly.

I'm not dissing Ae or their fans. I have a great deal of respect for Ae and what they do. My issue is with the hype. Lesser known artists have put out releases equal to or better than Autechre in the past decade, but they never got even a fraction of the attention an Ae release gets. In fact, you're seeing that with lots of electronic music acts now. I think about how Flying Lotus, Nosaj Thing and Hudson Mowhawke were being hyped to death, but you hardly heard a peep from anyone with regards to Machine Drum's "Want to 1 2?", which was arguably much better than anything the later three artists ever put out. Why, 'cause he's been around the block - he paved the way and wasn't the next big thing. Because of this, I only discovered MD's lp a month or so ago. Still, this is all on another end of the electronic music
spectrum.

The point is, Oversteps might live up to the hype this time, and even though I didn't listen to it, I still doubt it will, after over a decade of feeling like a dog chasing its tail with regards to Ae's work. You could go on about the complexities and the layers and patters and whatever, but I honestly believe that Ae are still standing on the shoulders of their early output, and without those seminal first three (or four) lps, they wouldn't have the nearly the amount of attention they currently get.

dhex - I've listened it to it even less due to work busy-ness, but I'm going to upload it to my phone today so I can have it on permanent repeat.

Steve - Ae definitely lost their way in the 00s, but it sounds like they have finally fallen in love with music again. It's worth looking in to Oversteps. Pretend it's a new band you've never heard of. Pretend their name is Jason's Killer Peanut Butter Fartbucket: you'll hear it in a whole new way.

I'm downloading it now. Excited by what I heard in the Bleep previews.