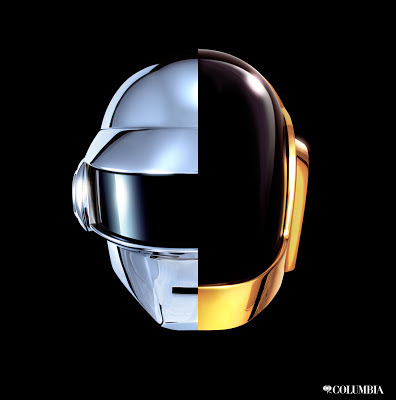 There are parts of Daft Punk's new album Random Access Memories I want to store in my RAM forever... but this is only part of the story.

Let's get some context. For a band that has only released three albums, Daft Punk's effect on dance music has been stratosflippingpheric. Every French house band from Cassius to Letherette gets a Daft comparison.

However their output over time, as they've moved from Revolution 909 to Aerodynamic to Robot Rock, has lost traction. You could argue their nadir was the Tron Legacy soundtrack, and even though the album itself it's much better than you think it is, the movie did translate as some kind of weird Bangalter-Christo vanity project.

The problem with Daft Punk releasing a new studio album after all this time is the Justice Imperative. The Justice Imperative is where a great Parisian electronic music act - let's for argument's sake say, er, Justice  - feels the need to fall so in love with their own arse, they prog themselves until they disappear completely. Except it's not prog: it's more "The Who teaming up with David Guetta". Have Daft Punk fallen into the Justice trap?

Tragically, yes. At least, to some extent.

The clue is in the epic riff that opens Give Back to Music. The riff disappears quickly and we're into a disco jangle ripped straight from Get Lucky, which is also here in (thankfully) extended form. But remember that opening few seconds. It will return.

Let's start with the positive. Doin' It Right featuring Panda Bear is exactly what you'd want a DP / Animal Collective collaboration to sound like and it's brilliant. Slow, teasing, melodic and glorious. Lose Yourself In Dance is utter disco singalong, lifted by Pharrell Williams's vocals against the robots' cheerleading him with "come on, come on".

Giorgio By Moroder starts, literally incredibly, with Moroder himself waffling at length about singing in discotheques and his lovely Moogs before launching into a spiralling, string-laden emotive nine minutes - a theme which is, incidentally, revisted on final track Contact. They spoil Moroder though with a bit of jazz noodling, but the track is pulled back with hi-hat-abusing live drumming that rises into a distorted acid shred climax.

The rest of the album is either bold experimentation or .. well...

Touch is bonkers. We find ourselves in a Doctor Who horror hell, which then inexplicably morphs into Michael Ball in Phantom-mode, sinister strings and oodles of expansive trip hop. Vocals are by Paul Williams, who wrote the Muppets' Rainbow Connection, and that kind of makes sense and it's kind of brilliant or, more worryingly, it's something else. Parts of this track can be coupled thematically with Motherboard, which comes across as an ambient rhythmic UNKLE, its arpeggios the only clue as to it being Daft Punk track.

And now the rest. The horrible, horrible rest.

It's either bold experimentation or... this. That's what the opening riff alluded too. You're expecting 80s hair and flares and anything but a touch of Sade or Warren G, but there it is on Beyond which g-funks it up so much it's almost a total steal of Michael McDonald's I Keep Forgettin'. And The Game Of Love's guitar harmonic MOR barely sticks its head above 90bpm and it is smooth. Not just smooth, but Sade-smooth. We're talking Smooth Operator smooth. Okay, let's cut the crap: it's basically Smooth Operator.

Instant Crush, an obvious single, could be an Avril Lavigne track when it starts out but it gives in to Europop territory with light Royksopp or Mew vocals. Utter cheese... but they've softened us up with Get Lucky, so it's less of a shock. Still. This is Daft Punk and they've lost da funk.

Fragments of Time is awful MOR pop - Todd Edwards should stay on the other side of the microphone - and the line on ballad Within which says "there are so many things that I don't understand" will seep into your subconscious all track long until you are diving for Teachers (the track and the drink) to make everything okay again.

On Random Access Memories, the experimentation is sometimes brilliant, but it is all-too-often the sound of a band losing their confidence and losing their sound. There are parts of Daft Punk's new album I want to store in my RAM forever and some parts I'm going to need an anti-virus programme to purge.

There is enough here to make this their biggest album to date. They've gained traction again - but at what cost?

Email ThisBlogThis!Share to TwitterShare to FacebookShare to Pinterest
Read more on: daft punk

I love their new video. Wouldn't expect anything less from Daft Punk. http://smarturl.it/DPLYTD