Anxious Fats and the castle of happiness 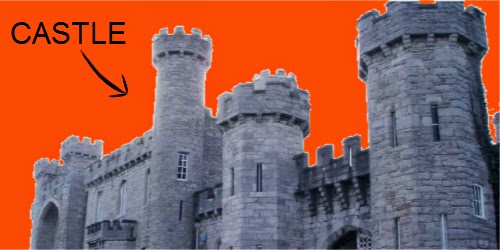 The trip was a nightmare. Some of my school "mates" were nobbists of the highest degree, and I spent the whole vacation feeling confused and overwhelmed. I still remember a supermarket cashier barking shapes at me while I nodded in a way I thought looked intelligent.

I still do the same nodding now.

Ever since, I've had an anxiety about not enjoying the moment. Such as dancing my mullet off in a club yet worrying about how many shirt buttons I should have unfastened, opting between one and two and three back to one like some kind of crap fabric traffic light.

It's happened again recently, only in a more general sense. I've been caught in a cycle of logistics and planning and stress. Even when chillaxing with my bluds (I think these are French words), my mind has been a dripping pipe of mental notes and worries.

I attended a writing workshop run by Prole Books at the turret-tastic Bodelwydden Castle. I only went because I followed Prole on Twitter and, hey, it was in a castle.

I’m not really a workshop kind of guy, but the process loosened some pretty rusty bolts. I realise that clashes with my pipe metaphor, but shut up. Writer Sue Pace led the workshop without dictating, and allowed freedom to simply enjoy the process of writing.

The weekend forced me to stop, to take a step back. I threw some priorities up in the air and let them land in a different order. I've written a lot. I’ve even been facing some tiny demons this week that I have been avoiding for a long time.

Also this week, I performed with Flashtag at Manchester Literature Festival in a kind of literary human centipede which was, according to reviews, comedic and hilarious. And as Bad Language I co-hosted a bunch of rising stars along with development agency The Writing Squad and author chappie Matt Haig. I had an immense time at the Festival and thanks to everyone for making it feel prop spesh and well good.