Big beat's gonna work it out, maybe, perhaps not 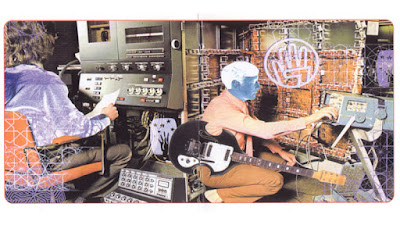 From grunge to g-funk, from trip hop to Brit pop, there’s one thing you can be sure of about the 1990s: the one forgotten genre might be big beat.

Everyone knows the artists. The Chemical (Dust) Brothers blasted the roof off the place with Brother’s Gonna Work It Out, Fatboy Slim had a party in his head with Gangster Trippin and even if people don’t know the band name, they may well recognise Bentley Rhythm Ace (pictured).

But as a name, I reckon there’ll be a lot of younger people who don’t know “big beat”. The label kinda got swallowed up by the cool Britannia thing. Or perhaps it shed its identity when it went massively mainstream: see the Prodigy’s Firestarter or The Propellorheads’ History Repeating.

Maybe it just became known as video game music. Maybe, as Acid Ted suggests, it just got a bit embarrassing.

Not that labels matter that much, but big beat acted as a useful curatorial guide when picking tracks in my early DJing days. For example, there was a great block rockin’ underground in the shape of Brassic Beats and Heavenly Social, with the likes of Req, Cut La Roc, Monkey Mafia and the Skint Records founder Midfield General.

There’s a longer piece in this, and I may well pen something for Electronic Sound. In the meantime, to test my theory, I’m going to be shaking teenagers by the shoulders until they name all the 1990s music styles.