Soaking up the rays with Way Out West 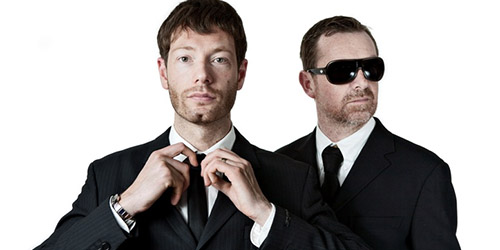 The Bristol underground scene spawned some big hitters that were heavy in sound and in influence: Massive Attack, Portishead, Tricky, Timmy Mallett. Wait. No, not Timmy Mallett.

Way Out West came from that scene too, but their sound was lighter. A music meringue. They straddled trance and drum 'n' bass, and I think they hit a particularly sweet spot on their 1996 singles The Gift and Domination. The latter sampled three different John F Kennedy speeches, all for just three words: "madness, power, domination". Not that we have any of that kind of nonsense in today's political climate. Ahem.

I had a chat with the Way Out West chaps today. We talked about the old days, when all this was just fields. They both mentioned their love for LTJ Bukem, and their recollection of playing on Top Of The Pops was particularly amusing - although you'll have to wait for a future edition of Electronic Sound for that story.

Just like Timmy Mallett, they're still going. Unlike Timmy Mallett, they haven't taken up fine art. (Seriously: check out Mallett's Palette.) Way Out West's latest work has a distinctly Balearic feel, which is probably a reflection of soaking up all that sun on their international DJing schedule. I live in Manchester so I have to ask Timmy Mallett to paint my suns. He really brings out those yellows.

Have listen to recent track Oceans and old track Domination below.

Email ThisBlogThis!Share to TwitterShare to FacebookShare to Pinterest
Read more on: new music, way out west