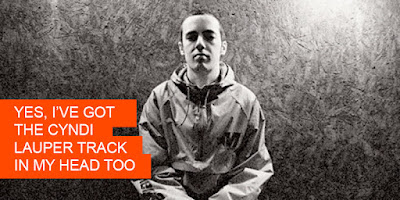 Here are a few things I've been spinning on my gramophone in February 2019.

Pye Corner Audio's Hollow Earth, which purports to revive the “ghosts of ’90s house euphoria” but actually ties the corners of those ghosts to fashion them into a parachute designed to glide you into seriously smoky ambient valleys where you'll be lost forever. In a good way.

High Contrast's 2002 debut album True Colours, a great sister sound to Roni Size's Brown Paper Bag. In recent years, he was a music selector for the 2012 Olympics opening ceremony, and he had a track in T2 Trainspotting. Which is like going from the sublime to the ridiculous. In a good way.

Seb Wildblood's Grab The Wheel, an EP from last year which is only just tugging on my musical heartstrings now. His deep house is simple, almost by-the-numbers in its structure - but boy, it's weedled up my pee-hole right into my guts. In a good way.

Kieran 'Four Tet' Hebden still refuses to tell anyone what he did with the first three Tets. While we wait for an answer, we'll have to make do with this cheery little album from 2017. I overlooked this at the time, but it's growing on me like a particularly persistent moss. In a good way.

Experimental sound artist Sweep has often found himself under the shadow of the better known silent composer Sooty. But this symphony of squeaks, juxtaposed perfectly with floppy ears, really speaks to the zeitgeist of our times. It's like having your brain scooped out with kazoos. In a good way.