Time for a poke: new music from James Blake, Req and Mikron 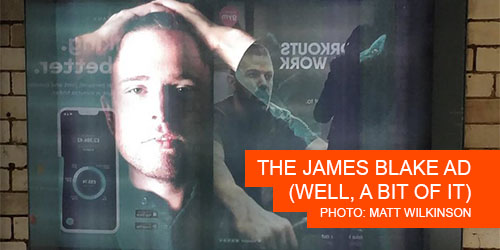 Here is some new music that has just dropped from the sky like a shower of frogs.

First. After a teaser advert in a tube station, which displayed the name of the album so really was so much as teasing as being poked in the face with a telegraph pole, James Blake has blurted out a new album. It's called Assume Form.

He's much more than a Singer, capital S, these days, with all his harmonies and sweetness. I'm an instrumentation junkie, preferring the punch of his 2010 single CMYK. Still, I'll give it a listen - his delicate vocals are like chocolate-dipped honey served on the eyelash of a unicorn.

Second. Req is delivering us Tape Transport: 1994-2000. Contrary to what its title may suggest, it's not the chronicles of a troubled VHS delivery company during the rise of DVDs. The Brighton b-boy beatsmith has a truck full of rare and lost recordings. His Sketchbook album on Warp back in 2002 is well worth a listen.

Third. There's also Mikron’s Severance, out now on Sheffield's Central Processing Unit. It's right lovely sounding and will tickle the ear of anyone into Detroit techno, Ulrich Schnauss and Boards of Canada.

I review two of these in the next Electronic Sound magazine, which you have to buy otherwise James Blake will come round your hovel and tease you with a javelin.