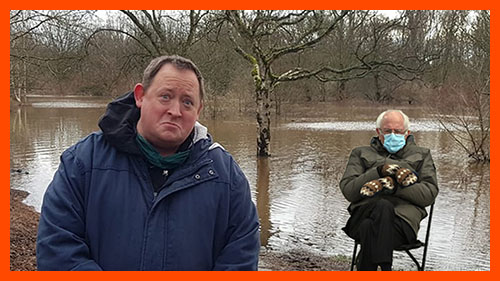 Hello. My name's Fat Roland. You might remember me from 'Fat Roland: A Space Odyssey', 'Dude Where's My Fat Roland' and 'The Fat Roland Who Went Up A Hill And Came Down A Mountain'.
I thought I'd plop a quick update on my blog, lest you think I've been kidnapped by monkeys or something. Most of these updates are trivial. One is not (but don't worry, it's nothing too serious).
Update one. I've been listening to a lot of Pet Shop Boys, and I'm in awe of the lyric:

I'm always hoping you'll be faithful
But you're not I suppose
We've both given up smoking 'cause it's fatal
So whose matches are those?

Update two. I had to postpone my Seven Inch show for obvious lockdown reasons, but it's all cool because I'll do an online version that is going to kick ass. And because it'll be online, I'm going to have to storyboard my whole show, which will be equally fun and brain-breaking.
Update three. I've just realised I'm the same age Susan Boyle was when she first appeared on Britain's Got Talent. I also saw a picture of myself which made me realise I'm now properly middle-aged. I'd better do something constructive with my life, like being a brain surgeon or flying helicopters or something.
Update four. A few days ago, I got evacuated. And no, I don't mean I had a bodily mishap with a hoover. The river Mersey got a bit angry and I got a phone call from Floodline telling me my life was in immediate danger and I had better do something about it. I spent the night at a friend's place, then went back to a thankfully unflooded home once we'd be given the all-clear. My main takeaway. A bit of discombobulation, but it was amazing to visit my friends. Thank you, friends.
Update five. Did you notice that update four was the non-trivial one? You did? Good.
Update six. I tweeted "I miss Donald Trump. His touch. His embrace. His warm breath. His fine collection of venus clams" and it only got two likes, and now I'm worried people will think I actually want to touch Donald Trump.
Update seven. Yeesh. I've said Donald Trump too much. Bernie Sanders is way better. I think he looks great in those mittens.
Update eight. That's it. That's all my updates. This was a bitty blog post without much focus, but better to have some scruffy words than none at all.