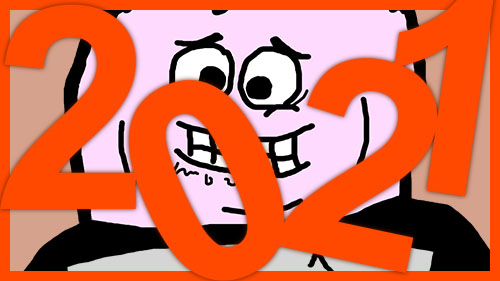 Yeah, you heard. I called you an idiot and you can do nothing about it. This is the new me: confident, assertive, dominant, and wearing a special hat that says "I am the best".

In previous years, my new year's resolutions have been pathetic. Staying off Facebook, answering emails more quickly, being nicer to dogs, that sort of thing. Those resolutions are for small-minded losers. The new me, the 2021 me, is going to have a big mind.

Everything is going to be bigger.

Strap in, because these ten 2021 resolutions are so full of confidence, they're going to blow your socks off. You have rubbish socks, by the way. Yeah, you heard.

I reckon I can take him. I watched that chess drama with the gaudy wallpaper and I'm an expert at chess now. The castle goes down the edges, the donkey does a sideways jump like it's avoiding an ants' nest, and the tall one just stands at the back and does nothing. Easy. Once I've trounced him at chess, I'm going to destroy him at Ludo.

Resolution 2:
Become a superstar DJ like they had in the 90s

I mean, how hard can it be? Stick a cassette tape on, pretend to move all the knobs, move the vinyl back and forth while saying "wickedy-wah", get on the front cover of Mixmag. I'm going to wear a tie-dye shirt with smiley faces on. The only song I'll play is Doop by Doop.

Pretty simple. Buy a nice house on Mars, preferably near a newsagents and a well-maintained public leisure centre. And then populate the planet by either sexy bonky times or a mass cloning programme. I've not worked out the details: my many offspring can sort that out. I'm sure my logic's pretty solid on this one.

Men! Fed up of queuing for a wee in public toilets? Want to avoid todger-tinkling tailbacks? I will invent a two-tier urinal system to speed things up. I can't reveal too much for intellectual property reasons, but Tier One is "Measured Micturition", which involves a tape measure and a waterproof notepad, and Tier Two is "Splash And Dash" which involves standing in the doorway and arcing over the loo queue. Just hand me my million pounds now, Dragon's Den.

I will become an Olympic host, just like a country. I don't know if we're due an Olympics this year: Sebastian Coe won't return my calls. But I will totally host it single-handedly. I might not have stadiums (the correct plural of which is "stadiumii"), but I can run around my living room in jogging bottoms balancing an egg in a ladle. Not a real egg, obviously, I'm not stupid.

I'll just stand on some bricks or something.

Resolution 7
Win all the marathons

All of them. London, Munich, Sydney, Bhutan, everywhere. Eddie Izzard did loads of marathons because standup comedians run about a lot on stage, so it was a natural progression. I don't want to do any actual running: I'm pretty sure if you bung the finish-line marshals a few quid, they'll plant a few bogus "this way" signs so my competitors get lost and/or fall into a crocodile pit.

Just imagine. I'm in a board meeting. Some suit is pointing at figures on a white board. The big boss at the head of the table asks for blue-sky thinking. I do a back flip right out of my chair, and everyone says it's "well skill" while doing the gangsta hand-snap thing. Hey! I'm the Back Flip Guy! It's what I do! See also: AA meetings, supermarket queues, rollercoasters, egg-ladle racing.

Do you know how much money Star Wars made? It was like a thousand pounds or something. I'm going to get rich by inventing Star Wars, although I'd get rid of all those little furry animals and the droopy-faced racist guy and all the robots and anything to do with space. It's basically going to be a dozen films of me sat in my pants playing computer Solitaire. The merch is going to be amazing.

My final resolution is going to horse your brain. I'm going to horse a seventy-foot horse in front of a crowd of horse, while horse-rope walking across a huge chasm which is horse metres high. Everyone will totally horse, and within horse weeks, horse will ask me to horse a horse, with horse horse and horse. Horse horse ladle, horse, horse on horse horse. Horse— (that's enough horsing around - ed)

Further Fats: The only new year list that counts (2017)