Talking or not talking about Bad Lip Reading 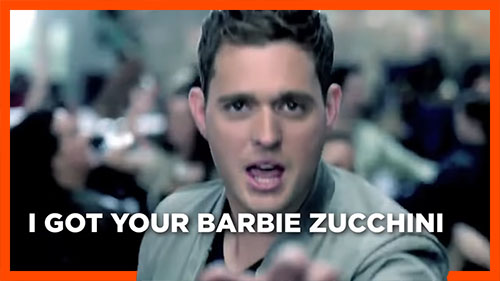 The spoof YouTube channel overdubs pop promos and current affairs broadcasts, getting Rebecca Black into a Gang Fight, having the Black Eyed Peas sing about poop, and giving Michael Bublé a scatological hit song about a Russian Unicorn.

This is the point where my jaw drops to the floor. Where did that ten years go? I can't be bothered to cut and paste emojis into Blogger, but if I did, you would be seeing a little yellow face with an exploding head. Ten years. Ten years!

I really liked Russian Unicorn. It turned something as bland as Bublé, who posted a good natured video reply because that somehow is ultimate Bublé, into something full of unhinged energy. Even better was Morning Dew, which mashed together Bruno Mars, Lady Gaga and Jay-Z to make a peon to furry pet monkeys and broccoli pizza.

Part of me insists I shouldn't like Bad Lip Reading. It revels in the worst pop music (Bieber, BTS, James flipping Blunt) and legitimises it through affectionate parody. It's decidedly off-key in places, referring to women as "chicks" and using a slang word for cerebral palsy that is pretty much verboten in the UK.

And it's fallen hard for Star Wars fandom, that most tiresome of fandoms, producing songs about seagulls in space, death by chicken-duck, and Yoda's stick ("it's just a stick"). That last one is pretty poor, but then again they did come out with the smooth electro banger Hostiles On The Hill in which the Skywalker guy fights the long leggy things in the Antarctic or somewhere. You can tell I'm a fan.

What's strange about the success of BLR, and channels like it, is its wonky place in popular culture. Take traditional TV as a comparison. 30 million people watched the Eastenders episode in which a vengeful Dirty Den give Angie divorce papers for Christmas. For years, that scene appeared in compilation shows and newspaper lists. It turned Christmas dark, and soaps have never looked back since.

The most successful BLR video has four times the views: their top five videos have racked up a third of a billion watches. Yet in the past ten years, I don't think I've experienced a single 'watercooler' moment about Bad Lip Reading. The same goes for other YouTube big hitters at the geekier end of culture: Tom Scott, Drew Gooden, those never-ending Vox factual videos.

This is all to do with the fractal nature of modern entertainment, where the metaphorical family sofa has been replaced by a wide scattering of deck chairs: the watercooler is now a zillion single water bottles. This more personal method of video consumption means we can spend an entire evening wasted on Fail Army clips without ever mentioning it to anyone ever. Maybe one day you'll mention it on a blog. Maybe.

And yet, I don't fully buy that. It's not fractal, is it. What we've done, in the UK at least, is swap four or five terrestrial television channels (and a wall of DVDs) with fewer providers of televisual entertainment. YouTube and Netflix dominate the market as BBC1 and ITV did in the olden days. I don't have Freeview or anything, but don't tell me that endless menu of things you don't want to watch adds up qualitatively to anything more than a single day of programming on Channel Five.

Anyway. Go and watch Bad Lip Reading videos so we can talk about it one day. A lot of it sounds like Uptown Funk but there are roses among the thorns. One of their BTS videos is childish cack, but the more recent BTS one seems to take ballad writing seriously.

What did we do without YouTube? Actually, we watched Flash videos. Badger, badger, that sort of thing. That is, oh goggle-eyed viewer, a whole different blog post.