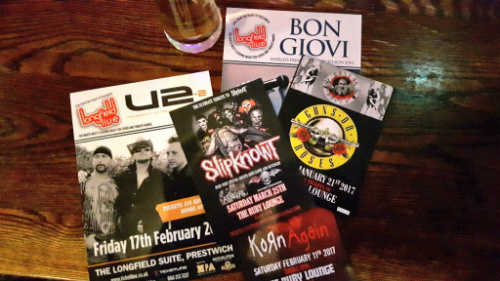 Get a load of these tribute band flyers. Korn Again. Guns Or Roses. U2-2. Bon Giovi. And the gloriously intoned Slipknowt. As you may guess, Slipknowt are from that famous Yorkshire town of, er, Newcastle-upon-Tyne.

A casual observer-- no, I found these flyers in a pub, so scratch that-- A tipsy observer may think that was the bona fide U2, until you notice they're playing in Prestwich. I mean, Prestwich is an upstanding place, but I wouldn't think a world tour by the rattly hummers would stop by there.

I respect tribute bands, living in the shadow of a more famous version of themselves. I spend enough time being mistaken for Johnny Vegas. I do wonder if I should heave myself around the comedy circuit with a pottery wheel. Call myself Johnny Fake-Ass. Swap the booze for meth so I don't entirely violate his artistic copyright. I've also been likened to an actor from Human Centipede 2 (no really), although I'm happy to leave that one alone.

These are the tribute bands I'd want to set up in the world of electronic music: Faulty DL, Josh Hoodwink, Afaux Twin, Fake-0-8 State, Norbital and Dupe. That last one refers to mid-90 chart-toppers Doop. Hey, shut up, this isn't easy.

If any record company wants me to tour as a tribute act, let me know. I can make pretend keyboards from cereal boxes. I'm sure I can sellotape some spaghetti together to make some leads so, y'know, sound comes out of the speakers. Which are made from mashed potato. Let's do this. I'll even play Prestwich.

Further Fats: Fake plastic CDs and eating too much cheese before writing a blog post (2010)