You burden me with your questions, you'd have me tell no lies 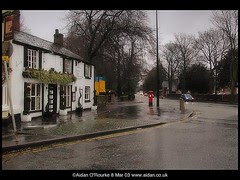 As promised to you, my faithful, delicious, succulent reader, here are the answers to the quiz I posted a week ago.

In 2005, upon hearing of a sponsorship deal which would see an HP sauce logo on the brown ball at all major snooker tournaments, it was Jimmy White who announced he had changed his name by deed poll to James Brown, and would wear only brown clothing when competing.

In the 1980s children’s TV series Jimbo, Jimbo the jumbo jet was so small because (c) his designer couldn’t tell the difference between inches and centimetres.

It was for Darth Vader that David Prowse’s voice was not deep enough, and Orson Wells was thought to have too famous a voice. James Earl Jones' voice was used.

“This is the Bridal Suite. Would you send up a couple of caviar sandwiches and a bottle of beer?” was from The Philadelphia Story.
“Well, I've wrestled with reality for 35 years, Doctor, and I'm happy to state I finally won out over it,” was from Harvey.
“Well, then you can swallow it, and it'll all dissolve, see... and the moonbeams would shoot out of your fingers and your toes and the ends of your hair... am I talking too much?” was from It's A Wonderful Life.
“You shouldn't keep souvenirs of a killing. You shouldn't have been that sentimental," was from Vertigo.

Before he was Yes Prime Minister, James Hacker was minister for the department of administrative affairs.

St James Park is the only FA Premier League Stadium actually in the centre of a city.

Paul McCartney's trio was Wings (apparently they were a trio when they topped the chart!), his quartet was the Beatles, his quintet was the Beatles with Billy Preston and the sextet was Ferry Aid. Yes, I know, sorry.

(a) From Here to Maternity was the comedic subtitle of Carry On Matron.

(b) You Show Me Your Waterhole And I’ll Show You Mine was the comedic subtitle of Carry On Up The Jungle.

(c) And Carry On Cleo was released in the USA as Caligula: Funniest Home Videos.

That's enough James for now. This is where you post replies saying "no, that answer was wrong" or "how on earth was I mean to get that" or "give me my leg back, Fat Roland, I can't play football without it."

No 3 is a great pun quiz question!