Theatre Of Pictures: Volume One

And so the Theatre Of Noise crew stumble into a studio to record a podcast, as explained in this previous post. This is the first of a series of three picture diaries of that podcast, featuring pictures taken by Fil*, otherwise known to millions as the number (4) in the next paragraph.

We arrive at the studio armed with literally tens of ideas. It's written on a schedule which is then pinned to a board and left teetering on a chair so we can all see it.

Before we air, you could cut the tension with a pair of Superdrug nail scissors. How would we use the time? Would we produce a successful programme without all the bitching and in-fighting that usually takes place? Already, Dan The Weather Man (pictured left) and my co-host Lee aren't talking: 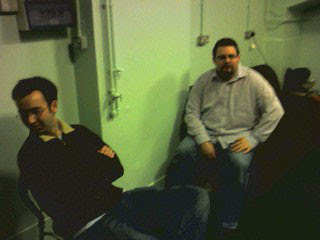 Just before the above picture was taken, Lee slapped Dan The Weather Man across the face. You can see Dan The Weather Man is still reeling, his thoughts of cumulonimbus and nimbostratus clouded over by feelings of hurt and anger. Clouded over. Do you see what I did there? That's why I'm a writer.

There was only one cataclysmic disaster: we forgot to get the balloons for our Balloons And Darts game.

Stefan The Hip Hop Bruce Lee is a black belt in b-boy stancing, and can drop the mic like a very unruly person indeed. His infectious giggling was one of the highlights of the podcast for me. Here he is taking a photo of a caterpillar hiding inside a matchbox. 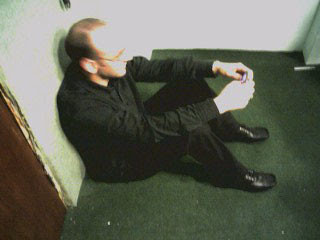 He will keep this photo on his phone for several days until he is attacked by a wall, when he breaks his knee and mashes his ribs. That bit is true, about the breaking and mashing, not about the photo, the caterpillar or the matchbox. Get well soon, Stef.

Just before we go on air, we take part in a corporate man-hug. This is similar to the kind of side hug you get in churches from people that would rather flagelate themselves than be physically close to you. In this case, we formed a large circle and leaned in at the waist, ensuring the most basic of hug while safely keeping our genitalia at maximum possible distance: 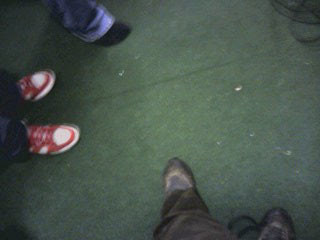 Okay, I lied about the man-hug too. Much of this post has been spurious, and I apologise. All you need to know about the podcast is some boys had control of a room with mics in and we could swear if we wanted to.

Looks like Stef The Hip Hop Bruce Lee is better already. Here he is doing squats as recommended by non-doctor Gillian McKeith: 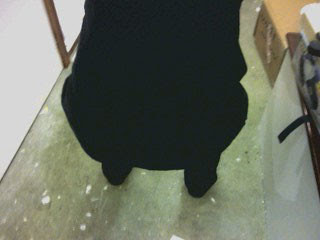 In the next Fat Roland picture diary extravaganza, expect to see George our studio man with your very own eyes, and be thrilled at the amazing technology that surrounded us; it was like living in the future, only the cars had wheels and the Dutch weren't ruling the world.

*I probably should have asked Fil's permission to use these pics...

something about slapping Lee on the nose and red shoes. Already said it once but can't work this dmaned machine and the comment has disappeared.

It is good fun reading your words, even though I was there!

What about slapping me on the nose!? Please put me out of my misery Mr Weatherman.

I am trying to download the now-legendary podcast from your myspace page, but it won't let me - just keeps opening it in a Quicktime player. What am I doing wrong? I have tried right-clicking but nothing useful happens...gah.

Patroclus, I suspect Myspace has a strange definition of the word 'download'. I think it means you can stream it, ie play it in Quicktime, but you can't actually save a real life mp3 to your desktop. You're doing nothing wrong. Myspace's usability is, well, useless.

Oh and 9/10ths and Weatherman... Weatherman's mysterious comment hasn't disappeared. Weatherman posted it on this post by mistake:
http://fatroland.blogspot.com/2007/02/lie-down-and-lift-up-your-t-shirt.html

And much do we appreciate your solutions...

Talking of solutions, I am trying to find somewhere new and fresh to put the Theatre of Noise podcast as the volume & quality on the Myspace version is rubbish, due to the shrinking I had to put it through to allow me to upload it.

If anyone has any bright ideas, please let us know!