Keep the balloons on the dead body (just in case) 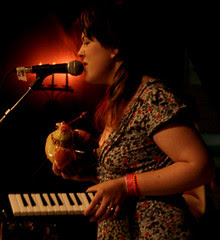 >Get on with it

I was thinking about Psapp (pictured) and how their playful sound reminds of how I used to love 'found sound' - people who made music from field recordings or things in their kitchen. I didn't realise, but Psapp (pronounced 'sap') are an example of toytronica, where they make electronic music from children's toys and toy instruments. And then I remembered that chap at a previous Futuresonic festival who made distorted white noise from a rewired Playstation.

I want to do this.

But I know how it would go. My friend Dan The Weather Man once gave me a build-it-yourself wooden car, where you stuck wheels onto a wooden frame, added some wires and stuff, then created the electrical loop to make the battery work and the wheels go round. It still sits in its original box, mostly built but lacking the right wiring to power the machine. I don't know about making things work, especially when it comes to electrical things.

So I'd buy my Build-Your-Own-Toytronica-Instrument from Ikea and lay all the parts before me. Nuts, bolts, a drill, a saw, two screwdrivers, then all the constituent parts that will eventually make up the instrument: a plastic trumpet, a music box, a Sega Dreamstation, an Operation board game, a Barbie doll, a chicken called Brunhilda (actually used by Psapp in real life) and, naturally, some mechano.

My main obstacle is the instructions. They're often written in cod English, translated from an obscure African dialect only know by six people and a parrot. I have little time for bad English, so I'd need to hire a translator. Actually pay out of my own pocket for a translator, who would then read out the instructions in clear, gramatically perfect Queens' Best.

Of course, hiring a translator would be ridiculous. No, not just ridiculous: totally ridiculous. No. I'd build one. I'd have a separate area of the living room floor with all the nuts, bolts, drills and chickens I needed to build me a translating robot. But then I'd need the instructions to build--- oh dear. You see how I'm no good at making things?

And then there are the electrical shocks. If I try anything clever with electricity, such as building a mecha-lazer beam to split the sun into two, I always get a shock. Static shocks are the worst. The most annoying thing about dying of electrical shocks is it takes ages to get the balloons off the corpse afterwards. At least they provide adequate padding in the coffin should your beloved remaining on this earth hire a particular clumsy-handed firm of undertakers.

I've also just learnt that Psapp throw cats at their audience. I've also got a growing suspicion Psapp are the ones who invented the phrase 'toytronica' in the first place, so I'm not even writing about a real genre.

Ah well, at least I found my blog, and that's more than I can say about my dignity / pants / brain / virginity [delete according to taste in humour].

Email ThisBlogThis!Share to TwitterShare to FacebookShare to Pinterest
Read more on: psapp, whimsy