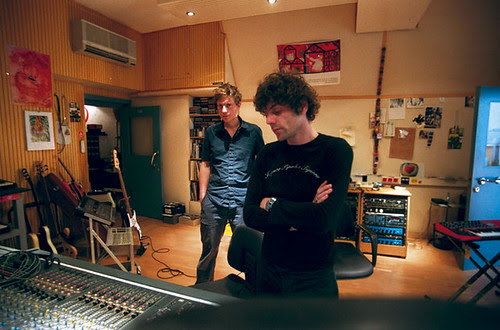 If you slashed me in half, maybe with a machete or a surprisingly sharp no-entry sign, you would realise the word MANCHESTER is written through me like BLACKPOOL through rock.

So when guitar electronistas Mouse On Mars (pictured) teamed up with the legendary Manc combo The Fall to form a whole new group called Von Sudenfed, I was bound to froth at the mouth whether or not it was any good.

Thankfully, it is any good.

Their debut album Tromatic Reflexxions is a clattering, shattering mess of bleeps and beats and Mark E Smith yelps. The LCD Soundsystem-style bedding is not as experimental as other Mars material; it is immediate and urgent and fits so well with Smith's distorted ramblings.

All counted, The Fall have released over 90 albums. Von Sudenfed's album stands as a highlight in that swaggering legacy. If you like The Fall, buy it.

This is a tottering pile of production work stretching back to the days when they were in short underpants. It includes a Nine Inch Nails remix, but only because Aviv were bumming studio space from Trent Reznor. It's an adequate compilation, but it won't last more than a handful of plays on your bright green Tomy CD player. (What do you mean you haven't got one?)

Thirdly, Foley Room is Amon Tobin experimenting with 'found sound'. In other words, he has been capturing noises with the magic of microphones rather than ripping from other records.

The result is a collection of sporadic sheep bleats and cutlery clinks that goes on for two hours.

I am, of course, lying. It's the usual blunted cinematic denseness from Tobin, keeping your head in the reefer clouds and your feet in rock and roll hell. Bar a few extra oddities (lions!), there's nothing new here, But that's the point; he's not allowed to change because he's good.

'Though it does include kitchen utensils, so I was almost right.

Ooh I might give that Von Sudenfed a try, as I accidentally found myself watching Mouse on Mars play live once, and very good it was too.

I wish I could work out how to put links in comments like wot you just did. Oh and I never even knew you could get Moomin merchandise.