A Full On Guide to Full On: Orson Karte's Tonight 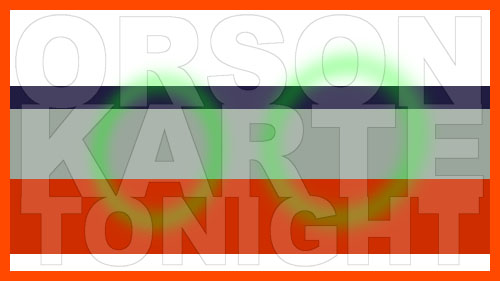 My deconstruction of the Deconstruction album Full On: Edition One continues. I realise this is niche, but it was a great compilation that deserves more attention. See all my Full On posts here.

The next track is Orson Karte's Tonight (Original Mix), a smooth-as-a-sausage progressive house track with sampled voices drifting loosely above warm ambient chords. It doesn't stay in the same place either, as it gets its head down for some skippy breakbeat action later in the track.

Let's have a bit of context. I'm about to throw a lot of information at you. If this following paragraph had a montage sequence, it would freeze at each person's face like a Guy Ritchie film to give you time to absorb all the names.

Orson Karte was not a well-known act in itself, but its members Julian Dembinski and Lex Blackmore also recorded as Positive Science for Ascension Records, an offshoot of the legendary ambient label Rising High Records probably best known for releasing music by The Irresistible Force, A Homeboy, A Hippie & A Funki Dredd and Luke Vibert. In short: no-one's really heard of Orson Karte (terrible name) but they come with some considerable pedigree.

More interestingly, Alexis Blackmore – Lex to his nearest and dearest – is responsible for one of the most memorable top ten hits of all time.

"Which memorable top ten hit?" I hear you ask, as you gasp in awe at your computer screen. "Is it Vienna by Ultravox? Blue Monday by New Order? Lovin' Is Easy by Hear'Say?" If you can just shut up asking questions, I'll tell you.

Lex ploughed a furrow on the dance music scene touring with The Shamen, apparently contributing to the rap on the Mysterons-sampling Make It Mine. Following the untimely death of The Shamen's Will Sin, he moved to Glasgow and became... drum roll... Blue Boy.

Who?! What do you MEAN "who"? You definitely know Blue Boy. They had one of the most memorable top ten hits of all time. Positively iconic. Here are the lyrics, which you definitely recognise:

Yeah, you know it. Incidentally, Remember Me sampled Marlena Shaw's 1973 live version of Woman Of The Ghetto, which is definitely worth a listen right here. The "babies" line later on in the song contains so much sorrow.

So here we have another insight into Full On. A relatively anonymous act called Orson Karte can be tracked to, five years later, a big stonking top ten single which went some way to defining a '90s 'sound'.

There is plenty more Full On analysis to come (see the track listing here), but it will all be a bit less interesting than this one.
"WHY won't it be interesting? I want everything to be interestiiiiing! Waaaaah!"
You're really starting to get on my nerves, imaginary reader's voice.