Kelpe and Klimek: from the faded to the filmic 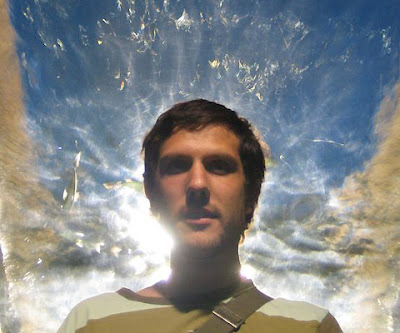 Cambio Wechsel is the third album from Kelpe (pictured), who, as you can see from that link, needs to update his website.

There's plenty of head-noddingness to the ambience, especially with the thin Woodstockian groove of After Gold and the Prefuse-infused buzz bass of Eye Candy Bath.

The seaside cheefulness of The Blankout Agreement is a little underwhelming, but spiralling from psychedelia and radiophonic samples to post-rock hip hop in the course of one album is pleasing - in fact, it's frequently scrumptious.

The whole effect is like listening to a postcard from a long forgotten era, and you can just make out the words Music Has The Right To Children on the postcode. I just wonder if it's sometimes a little too slight and faded.

Klimek also throws an album at us this week, in the expansive shape of Movies Is Magic.

It's filmic. Crikes, I've called Klimek 'filmic' before, but that's the whole point of this album. The idea of producing an album of cinematic audio vistas is not new - just ask David Holmes - but this is epic stuff. It's pretty much what I imagine it's like to hear the whole universe at once.

Tracks like Pathetic And Dangerous and the fabulously-titled Exposed To Life In It's Brutal Meaninglessness sway and wash against the surround-sound speakers.

Others, such as opener Abyss Of Anxiety (Unfolding The Magic), are darker, danker, and much less multiplex, giving this album much more crunch than ambient music often offers.