Autechre will get-ya their new album in March 2010 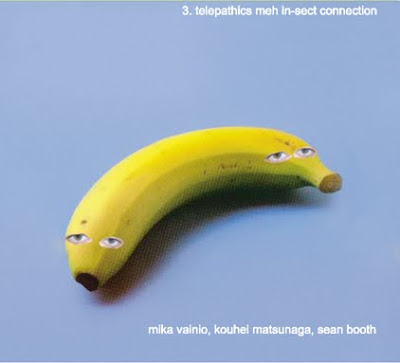 Update: Since this blog post, Autechre have confirmed full details of their 2010 album. Jump to my latest piece on Autechre's new album.

In March 2010, we will get a new album from Autechre (other than this Sean Booth one, pictured).

The new album news is according to this Dutch plug for a gig taking place on 9th April. I'm no speaker of Dutch (I can manage as much as "ik ben gek op Amsterdam", which isn't even true.

But the wee bit of information further down the page reveals:


which when mangled through Yahoo Babelfish, reads:


So it could be complete horse-blouse. But I have counted: Quaristice was their ninth album, so it seems AB Concerts know something I don't.

Thank you to We Are The Music Makers for the tip-off.

Meanwhile, Autechre's Sean Booth is working on a collaboration with architect-turned-ambienteer Kouhei Matsunaga. The album (artwork pictured above) has the snappy title 3 Telepathics Meh In-Sect Connection.

Update: Since this blog post, Autechre have confirmed full details of their 2010 album. Jump to my latest piece on Autechre's new album.

As I read this, an email wafted in from iLike via Facebook, about another Autechre gig:

Brilliant. I'd hope that iLike only sends messages about things people read on my blog.

There's a venue in Nottingham called 'Stealth'? It sounds rather more exciting than it probably is.

"Naar aloude gewoonte wordt daar tot op het laatste moment overbodig geheimzinnig over gedaan." actually translates as, "as usual, people are being ridiculously mysterious about it up until the last moment."

Wow, Babel translation really is a bit wild and wrong, isn't it? Thank you for the translation!