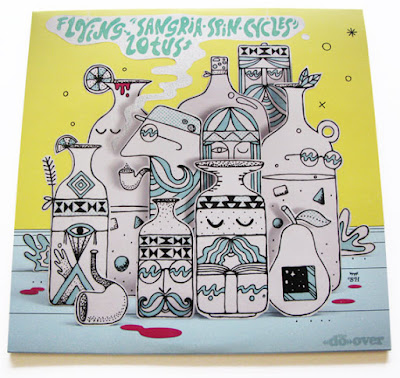 Joy Orbison has announced a new EP, The Shrew Would Have Cushioned The Blow, to be released on February 22nd.

The Croydon mailroom worker, who started DJing at the pimply age of 13, provided one of 2009's highlights with Hyph Mngo. In Shrew, he gives us more of the usual Joy: swelling dubstep set to grime up the dancefloor with washes of insistent synths.

The EP features a remix by Actress and is probably the best mouse-like electronica since Mouse On Mars and, um, Vole-netian Snares.

Flying Lotus, that hunk of manly beat production, appears this month on a cute-looking 10" courtesy of the Do-Over crew. On The Do-Over Volume 1, there's FlyLo's Sangria Spin Cycles and, on the flip side of the disc, you'll find Motownie beatster House Shoes with his crunchy soul stormer The Makings.

Both tracks are crisper than a starched collar fresh out of the drier, but the best thing is the artwork (pictured), which feels all rather Northern Quartery, cheerful and, well, a bit chick-lit. And yes, it now means I can call Flying Lotus a big flowery girl and not feel bad about it.

Keep an eye on the Do-Over for more, um, doings in the future.

Pantha Du Prince is ready to pounce with his new album and Rough Trade debut Black Noise (as promised in my 2010 electronica preview).

But first, a single. The shoegaze influence that once dripped through the sound of Pantha Du Prince has well and truly dried up for his recent 12" The Splendour.

Now, we have pin-sharp four-four minimal techno with a kitchen full of clanks and micro-samples. It is pristine: you can see your face in it. I prefer the dirtiness of his 2004 album Diamond Daze, and The Splendour is unlikely to stick in your head for too long, but it's no less beautiful for that.

Martin Kemp has taken time out from touring Sign O' The Times with Kajagoogoo (I get my 80s music mixed up sometimes) to bring us a snappy, dark slice of twenty-tens dubstep.

Okay, it's a different Martin Kemp and it's a crap joke. This one is brother of Brackles and his recent single After The Night is an uneasy, primative slab of multi-rhythmic 2-step and should ensure new imprint Blunted Robot's place on this year's calendar.

Listen to The Shrew Would Have Cushioned The Blow here. Cast your ears on Sangria Spin Cycles and The Makings on the Do-Over blog. Hark ye The Splendour on the Rough Trade website. And listen to After The Night at Boomkat.

You can stream Joy Orbisons The Shrew from a link here EPhttp://bit.ly/81552D there's also an interesting article about him too.

Chris - In a similar Paul / Pete O'Grady confusion, for a moment I thought Matt Parker was one of the South Park creators.