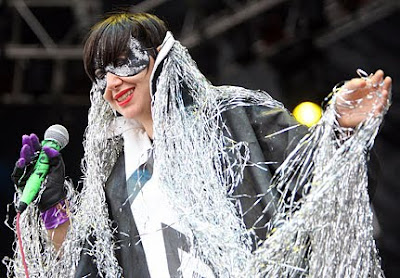 The grouchy Oscars have chucked sand in the face of Yeah Yeah Yeah's frontpiece Karen O and king of ambientronicableeps Brian Eno.

It seems that neither musical genius will be allowed to vye for the Best Original Score Oscar gong at the 2010 Academy Awards. Which is a shame for Karen O for her work on Wild Things, my favourite film of 2009.

The reasons are dull and not worth going into here - thank goodness Pitchfork have done that already - but this raises an important and probably era-defining question:

How else can we decide who's better? Karen O or Brian Eno?

Here's how. (Coughs.) Gentles and ladymen, I present the 2010 award for the Best-Original-Karen-O-Or-Brian-Eno. The nominees are: Karen O and Brian Eno. Let the judging commence.

Karen O is obviously not her real name. Her proper name is Karen Lee Orzolek, which almost rhymes Roland Orzabel. But she is trumped by the ridiculous birth moniker of Brian Eno, which is Brian Peter George St. John le Baptiste de la Salle Eno. And that rhymes with nothing - like orange, modem or Christmas tree. Best real name: Brian Eno.

Brian Eno may have thrown us a couple of bones in the shape of January 7003: Bell Studies For The Clock Of The Long Now and Lady June's Linguistic Leprosy, but Karen O clearly wins because, with It's Blitz!, she clearly loves exclamation marks whereas the bald one thinks he's above such things. Stupidest album title: Karen O.

I don't think the Yeah Yeah Yeahs have ever invented anything, so Karen O tumbles at the first obstacle. Brian Eno, meanwhile, invented the Windows 95 start-up sound and is often incorrectly credited with the invention of ambient music. Best inventor: Brian Eno.

'Brian Eno' is an anagram of 'One Brain', while 'Karen O Out Of The Yeah Yeah Yeahs' is both an anagram of 'Yo-ho-ho! A heathy Yankee features' and 'A Nauseate Feathery Hey Hooky Ho'. Best anagram: clearly Brian Eno.

The award for the Best-Original-Karen-O-Or-Brian-Eno goes to Mr Brian Eno.