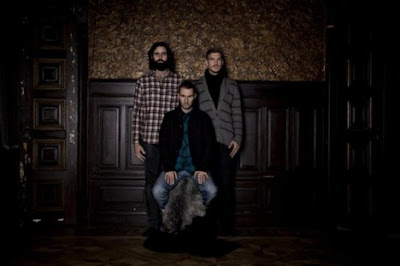 I swear the Coen Brothers would approve of Bullion's new single: it has more than a hint of Jefferson Airplane circling around the edges.

Say Goodbye To What is a californicating slice of pop psychedelia and it will be released on One-Handed Music on January 25th. Imagine a Led Zeppelin filled with laughing gas - it floats nicely alongside Bullion's Young Heartache EP from last year. Worth checking out too is the b-side Crazy Over You, but it's the a-side that had my spine tingling like a dead-leg.

There are a couple of other tracks you need to know about...

I may be going soft in the head, but I'm rather fond of Sweden's Miike Snow at the moment (pictured). Silvia is weaker than his usual fayre, although the six minute version is more lovely than a digger full of puppies once it gets into its meandering, kooky stride.

Miike Snow appear to be the pop band it's okay for electronica nuts to be into. You can watch the new video of Sylvia on Youtube: no, that isn't Viggo Mortensen.

Finally, the mauve boy wonder Joker is producing some seriously good stuff at the moment (see what I did there? Joker? Serious? Oh never mind.). His 2009 track Digidesign has got itself an electro-tastic Om Unit remix, and it has more kick than a donkey can-can. Meanwhile, Joker's recent single City Hopper, on the Tectonic label, is worth it for the slow fat fuzz basslines of the b-side Output 1-2.