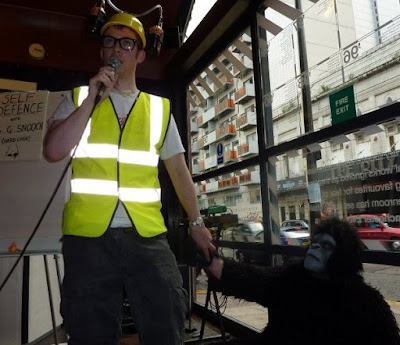 While I have been scouring the unhoovered corners of my dungeon for my much-neglected mojo, I've taken part in a strange and distracting competition.

Chris Killen is the author of a novel of sleaziness and good manners called the Bird Room. I read it ages ago, and I'm still haunted by a moment in the novel when a character goes to the toilet while--- well, I'm not going to spoil it, but let's say I'm surprised he didn't wee on the ceiling.

Mr Killen raised a challenge on his blog that his desktop background was tidier than other desktop backgrounds, and if yours was any tidier, why not email in a screenshot and there would be a grand 'desktop battle'. This is what writers do when they're not writing blockbusters.

In short, I took on Chris' own desktop and won, beat the challenge of the most minimal desktop ever, then finally fell against Socrates Adams-Florou and his army of folders. It lead me to write a terrible poem of 12 rhyming couplets in the comments of this post here., although thankfully my friend and colleague Dave Hartley took on the challenge after me.

All very silly. I also spent a night as Bo the frightened gorilla (pictured) at Manchester's Cabaret Formerly Known As Bucket, which was, I have to say, the hottest thing I have ever done. Oh and if you missed my seminal Gospel According To Aphex Twin, I plan on performing it in another venue in Manchester in the next brace of months or so.

I've not been well, but I think I'm re-finding my mojo. I'm not quite right, because I've just spent several paragraphs talking about organising folders and left only one sentence for dressing as a gorilla (for which I spent a day's research at Chester Zoo, for crap's sake).

PS - if you do blog and you're based in Manchester, come and meet me. There's a blog meet on Tuesday night this week and the lovely Lowry are providing boozebeer.

Email ThisBlogThis!Share to TwitterShare to FacebookShare to Pinterest
Read more on: gigging, whimsy