Who do I hate more? Morrissey or Axl? 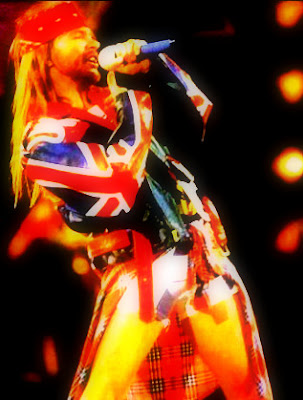 Regular sufferers of this blog know I like to have a public enemy number one: a Moriarty to my Jeremy Brett; a Joker to my Adam West; a seven evil exes to my Michael Cera.

But now I am torn between two new enemies: Morrissey calling a fifth of the world a subspecies or Guns N Roses' Axl Rose treating his fans like crap in Dublin.

One one hand, Mozza's flirtation with racism is a well-trodden groove he should have stepped out of more quickly. On the other hand, Rose is demonstrating a basic failure to do his job: turn up on stage and sing.

First, the flower-fondling fop. Morrissey seems to think himself untouchable, ignoring the press and replying to everything everyone ever says to him with a swooned "well, aren't we all?" He once draped himself in a flag and the liberal media has drawn daggers against him ever since. It was okay, however, for Geri Halliwell to dress in the same flag a few years later because, I s'ppose, she was well fit and that.

It's hard to know whether Simon Armitage took his quote out of context in the recent Grauniad article, but Mozza certainly seems to treat issues of nationalism with a clunk-handed carelessness that compromises his integrity and makes it difficult for his fans to love him. I think history will judge Morrissey fairly though: in the words of Armitage's poem Poem:

And now to the cat-squeezed voice and the kilt and the hair. Axl Rose is in such a stratosphere of rock glory, he will have no idea what it's like to live on beans and dust for a year to save up enough money for a gig. He disappeared for forty days and forty nights before turning in an album called Chinese Democracy (are you reading, Morrissey?) which sounded turgid and confused and, even worse, boring.

Whatever went wrong with the Guns N Roses shows, who didn't wake up who and who was supposed to play until when, Rose's protestations at the organisation of the Reading and Leeds festival seemed shallow in the light of the later shambles in Dublin. But when you're in awe of bands like this, don't you expect a bit of diva nonsense, for them to over-use the illusion of the emperor's new clothes?

Both artists are living off former glories - try and find any of their fans that *don't* like their older work - and the bolt-gun of retirement hangs heavily over the old heffers. At least the Smiths frontman can still turn in a tune or two. Which brings me to my conclusion.

Axl Rose makes substandard music and presents it by snoozing in a hammock made out of his massively big head's bandana instead of hitting the stage on time. Although Morrissey can't match his past brilliance, Davyhulme's most famous quiff knows how to perform, how to write a song and how to do his flipping job.

If, instead of writing this blog, I just did a giant poo on your computer screen, although I'd be improving the quality of your user experience, I wouldn't be fulfulling the most basic element of my job description: tapping on my keyboard while hoovering a quart of Talisker then smashing 'Publish' with my forehead.

If Axl Rose can't do what he's meant to do, then he's nothing more than the anorexic bastard child of Mick Hucknall and Mickey Rourke squealing like a cat kazoo at a barrage of drunkenly-hurled bottles of piss.

Yes, Morrissey, shut up, please, just shut up, but Axl is my new public enemy number one and James Blunt can rest easy.

Good job. I agree with you and to put it more succinctly - Axl Rose is a colossal knob.

Thank you for your time.

No, thank YOU. I will be doing a big poo on your computer screen as recompense for your succinctness.

is this a thinly-veiled rik vs dave blog post?

Just to reiterate what I’ve been saying in various crevices of the interwebs since Saturday morning: a subspecies is not a subnormal species. It’s just a subdivision of a species, so Siberian tigers are a subspecies of tigers. And Siberian tigers a cool. Morrissey’s comment is scientifically illiterate, but not inherently racist. I thank you.

Anonymous - for those not in the know, Rik is a GnR fan and Dave is a Moz fan and they both work together. And I think Dave wrote that comment. For what it's worth, it's a thinly veiled Let's-All-Listen-To-Lady-Gaga post.

Tim - Or, Morrissey's comment is scientifically accurate. He was probably drawing a Venn diagram at the time:

Morrissey: "All Chinese are people, but not all people are Chinese. See?"

Armitage: "I think so, but can you show me again?"