Greenbelt 2010: thronging bowels and fibs from the elderly 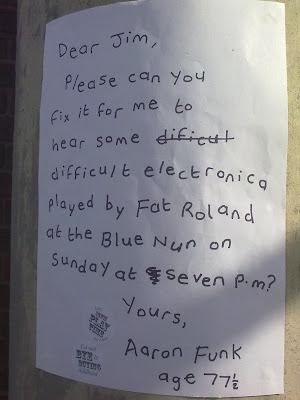 My annual pilgrimage to Greenbelt Arts Festival was plagued by being ill from head to heel, but I still managed to fit in a few hours of DJing.

I promoted the second set, on Sunday, with these posters around site (pictured). Most of them were quickly whipped down by anxious cleaning staff, but this one (pictured) survived next to the mens' loos for at least 24 hours.

You'll notice the stickers in the bottom left corner. They appeared thirty seconds after I put the flipping thing up. Without me noticing. As I was standing there. Very odd.

Other posters were the same bar the name at the bottom, which varied between different levels of stupidity (Susan Papp, Timothy Fishwhip). This poster is the only one that used someone's real name (Aaron Funk is Mr Venetian Snares).

This particular set went brilliantly, and thank you if you are one of the people that made it down. I didn't actually play any Venetian Snares, but only because the venue manager specifically told me "no Venetian Snares!". Which I don't expect happens much at Gatecrasher or Ministry Of Sound, and so is testament to the wonderfulness of the venue.

Anyhoo, back to the poster next to the loos. While I was stalking the men's toilets, which was constantly thronged by people of all ages and bowel states, I heard this very cute conversation between a seven year old boy and his grumpy younger sister:

GIRL: It just someone having a laugh. There's no way they're 77.

BOY: Well, I think it's funny.

BOY skips off. GIRL takes one more look at the poster, then shouts after him:

GIRL: Anyway, everyone knows you never put your real age at the bottom of a letter.


I don't think they came to the gig.

Timothy Fishwhip? I’m sure I got called that at junior school.

Were you a piscine pesterer?

Seeing the poster while exploring the site made me smile, as did of course THE TUNES.

Thanks for the gig(s), Carl!

The posters were a spontaneous idea. I found myself in the Worship Co:op with some blank paper and a marker pen, so I hand-scrawled half a dozen, all identical apart from the author's name. They were surprisingly eye-catching considering they were basically crap!