None An Island: on and on 'til the break of Lorn 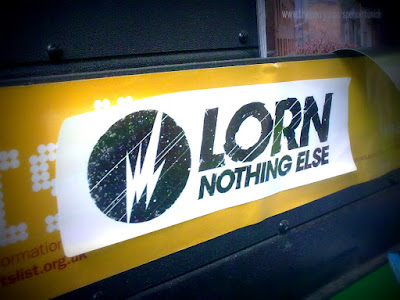 Lorn is releasing an EP this month. Headed by his cut None An Island, one of the more straightforward Hudson Mohawke-style tracks from his Nothing Else album, there's plenty of lazer-guided adventureness here. A filmic fuzz bass, intermittent angelic chords and a sneaky reggae line.

But proper worth a look-in is one of the other tracks on the EP, Samiyam's take on Lorn's Brainwaves. Starting like a malfunctioning alarm on the Flight Of The Navigator ship, this is two parts hip hop and twelve shots of terror.

The track is understated, almost nothing really, but you imagine that dropping in a cavern like the Warehouse Project and we have some serious trouser-drenching excitement going on. Here's a clickable plaything: give it a tickle.

Picture: by me, spotted in the Precinct Centre, Oxford Road, Manchester. I also saw one on the back seat of a bus, but it would have been inappropriate to take the picture when someone was sitting on it. I'm weird, but not creepy-weird.