This picture of Fred Durst is offensive 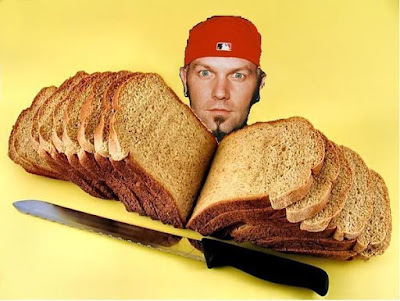 This picture, made by Ian Breen and uploaded to the world by Anclove, is deeply disrespectful about Fred Durst and his oeuvre.

Fred Durst's debut opus was Three Dollar Bill, Yall$ (pronounced "three dollar bill you all dollar sign") as a member of the Limp Biscuits. He changed music forever with his version of George Michael's 1972 hit Faith, and without his canon, we wouldn't have Eminem, Muse, Jesus Jones or The Rutles.

To compare Lord Durst to something as plain as bread, and not even interesting bread at that, is like comparing John Lennon to cheese strings, or comparing Mark Owen to a piece of furry calamari dropped behind a disappointing fridge.

I encourage you to follow Anclove and Breen on Twitter to ensure no more of this nonsense is spewed out of their pus-infested internet tubes. Keep an eye, lest they delve into dangerous spoonerisms like Rid Kock, Stinchy Trousers or Blan P.

That just made me shudder with a strange mix of horror and joy.